Are you a chatterbox?

Someone commented that as a person goes up the organizational hierarchy he has more time and less work. These results in making them spend their time in long conversations at workplaces. But this is not applicable only to the seniors; many bosses at all levels find chatting as a pastime in their offices.

There are people who are fond of unending talk. For them, there is no topic about which they can’t jabber. They may make the atmosphere bubbly, but end their day without much value creation. This is an asset as well as a liability. While they can make friends easily, some of their friends would vanish in no time if they find the chat too overbearing and worthless. Lot of valuable time is wasted through such unnecessary sharing of views and opinions about anyone and anything. I used to paste a small slip on the outside of my door of my hostel room where I wrote ‘I like chatting; But not now!’ That was my strategy to avoid some of my chatterbox friends. This strategy is not to escape from chatting altogether. But one needs to prioritize and allocate appropriate time for everything. 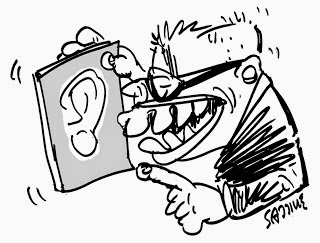 As per the blabbermouth theory of leadership, persons who talk the loudest or the longest would become the leader. This is no longer true. People expect and appreciate quality in conversations of a leader rather than the quantity. A person becomes ineffective, if he indulges in what some people call ‘verbal diarrhoea’. The tongue deserves more rest so that the mind and ears can be directed towards internalizing the ideas and actions of others.

Some managers have no hesitation to extend their chat to extreme personal levels.  Avila had this to share: ‘My boss had no sense of boundaries at work. She would freely mingle and get personal with the trainees. This was a bone of contention in our team. Then one day she attended one of my sessions where we were playing a learning game, she took over and twisted the game into the personal arena. Trainees and I got to ask intimate personal questions. Oh what a show down we had in the team room later that day!’

The time spent on telephonic chatting

Some bosses are known for engaging in long chatting with his pals over phone in spite of the fact that there are many important and impatient visitors waiting in front of them. Even when the listener doesn’t really enjoy the nonsensical cackling of the boss, he has to put up with that! Because the boss is on the other side of the phone!

Recently I had to visit a government office for some urgent work. Thanks to the out sourcing wave, the reception is managed by a private security guard. He was on the free telephone, chatting with someone very intimately. I tried clearing my throat very loudly to catch his attention. He looked up from his glass chamber and reluctantly cut-short the phone and gestured at me. He informed the room number of the officer with whom I had taken a telephonic appointment (which was obtained after several attempts as ‘all the lines to that office were busy’).

Since there was no peon in the vicinity, I gently opened the door to the officer’s room. The officer is on the phone and I smiled at him while he just looked through me . I took a few steps inside. We had not met each other before. That may be the reason for his continued attention to the impressive talk at the other end of his telephone. I thought , he would gesture me to sit. Realizing that the officer is very much amused by the incoming gossip and also in a mood to part with his own contributions to spice it up, I slowly came out of the room. I took the steps slowly, expecting a call from behind to stay back. I went out. Most of the staff members were busy over the telephones, either land phones or cell phones.

After a while, I peeped at the officer’s room and  found that saab was on another line. As his concentration and involvement during telephonic conversations were at its best I closed the door and came out. It was about one hour since I entered this office. Thought I could reach him after a few minutes , I went in search of one my colleagues who also worked in that office. Fortunately she was available in the room and very happily welcomed me with surprise as we were meeting after many years. As I sat on the chair, she ordered for coffee and then enquired where I am posted and purpose of the visit to this city. As I opened my mouth, one of her telephones rang. She continuously said ‘Yes Ma’am’, ‘Right Ma’am’, ‘Ok Ma’am’ etc.  for about fifteen minutes. Meanwhile other phones in the room also started ringing one by one, at alternate intervals. As she was about to sip the coffee, which was cold by then, and as I was about to answer her first query, her phone rang again. The voice from the other side was so loud that I could hear the lady. My colleague looked at me and told that she is her batch mate calling from the other side of the country and continued the conversation. They were discussing all topics which amused both of them viz. the promotion prospects, recent divorces and separations among colleagues, problem of domestic servants and mothers-in-law, of womanising bosses , nutty lady bosses, kids’ home works and what not. Even after about twenty five minutes of chatting (with intermediate smiles at me as if I am also a subject of the discussion or active participant of the conversation), she was not in a mood to close the call. Meanwhile her cell phone rang and she quickly glanced at the number and said to me, ‘Call from kids. They want my telephonic help for homework’. I gave her a gesture that ‘I will just be back’ and hurriedly escaped the room. May be she would have thought that I had gone to respond to some natural calls. I peeped once again to see whether the officer was free, but found him still pursuing the business of chatting over phone.

In a study conducted by Vodafone UK, it was found that 65% of managers do not mind staff doing personal things like calling family members or checking social networking sites, as long as they get all their work done. However, 65% of managers, may be as a ‘quid pro quo’ wanted their employees to work outside their traditional office hours.

As one goes up one should speak less and listen more. Bosses should be the role models in demonstrating to the team about the value of time and the need to be judicious while engaging in telephonic conversations at the workplace, whether they are made for official or personal purposes.

What is the solution?

It is written in proverbs that ‘A truly wise person uses few words; a person with understanding is even-tempered’. Bosses need to demonstrate his competency and warmth not through many words but by short and sweet interactions. If you don’t value your time in the organization none will.

Don’t  encourage a chatterbox-boss by contributing to spice up the unending chat. At the earliest opportunity drive him to the point you need him to address. Avoid frequent interactions with chronic ‘chatters’.

Organizations need to establish a culture that discourages long personal calls at the work place. Practice a convention of conducting meetings with proper agenda without unnecessary digressions, but in a friendly and pleasant environment.

Effective leaders believe in the famous quote, ‘An ounce of doing is better than a ton of talking’. But that do not deter them from listening to the people who approach them.