“If anybody wants to see us, you have to break open the door”!

This was the note written and pasted on the door of their house in Bangalore city by a mother and her son. Don’t think that they pasted the above note and went out. Their lifeless bodies were very much inside. Police and neighbours found a sixty five year old mother and her thirty two year old son hanging from a ceiling fan. The son was an Engineer in a private company.
Police found a four page suicide note in the shirt pocket of the son, Sreenivasan. It was written legibly in English that they took this step because they could not bear the loss of the elder son of the family, who died a few days before due to cardiac arrest. He wrote: ‘My brother, Kumaresan  was our hope, strength, love and everything for us’.
Kumaresan was a government employee (Office of the Accountant General) and all the three of them were staying in the quarters of the Central Public Works Department. He had got this job on compassionate grounds as his father who worked in the same department died two years back while serving the same department.
The police found the television and several household articles trashed. Following was reportedly written in the suicide note signed by both mother and son:
“We are damaging a few things (precious) to us. We have already dumped some things in the Cauvery river along with Kumaresan’s ashes. We don’t want anybody to use these goods. Please destroy these damaged items. Our recently purchased ‘Tata Nano’ car, a bike, chit fund investments and other house hold items may be donated to orphanages or for charity.” They requested the authorities to repay the loan of Rs 50,000 taken from Canara Bank by drawing the money deposited in the Vijaya Bank. It was also written in the note: “We have kept some money on the table for our final rites. Please take it. Treat us like orphans and perform the final rites just like the way we did my brother’s. Take our bodies directly to the graveyard after the legal formalities.”

The day after
There was nobody to claim the dead bodies. No one was rather interested to give homage to the two departed souls  in their neighbourhood. Finally Police had to depend on the President of the Residents Welfare Association to get the final rites done. Where were the friends and colleagues of the company where the son, Mr Sreenivasan worked? Where were the officials and colleagues of his brother Kumaresan, who was a government employee? (Remember, they were staying in a government quarters!) Where were the neighbours? Where were the relatives? Even newspapers carried this report just because it was a case of suicide by a mother-son duo. What would have happened if they had a natural death living in continued depression and mental ailments? Of course, no ‘news value’.


As per statistics of the World Health Organization, every year almost one million people die from suicide. That is one death every forty seconds. And 10 to 20 times more people attempt suicide worldwide. There is an increase of 50% in suicide deaths in the last half a century. Number of suicides are on the rise across various countries. See the WHO report.


As per latest statistics from India, an average of 15 suicides take place every hour in India. 1,34,599 persons committed suicide in India in 2010 (Report released in October 2011). And there may be cases where suicides are reported as natural death to avoid legal complications and social stigma. There is an increase of 24% in the number of suicides in the last decade alone.One in every three suicide victims were in the age group 15 to 45. Bangalore city recorded highest number of suicides across all cities in India. 41.1% of suicide victims were self employed. 7.5% were unemployed and 11.3% were salaried employees. Government servants were only 1.3% of the total suicide victims. (Source: Reports of Accidental Deaths and Suicides in India in 2010, National Crime Records Bureau (India) (October 2011), Ministry of Home Affairs).
Social Pathology
The above incident clearly points towards the Social Pathology in the current techno-society. When relationships are managed by the keyboards and the emotions are expressed the form of emoticons, the relationships get blurred and can be wiped off by a momentary pressing of the button. The  interactions are never face-to-face but through cams and albums, the happy and sad events are shared through status updates than personal visits, and the personal and sensitive aspects of our life are shared  with people living in diverse locations. The boundaries are really permeable and life revolves around one or more sparsely knit social network groups. We live in a virtual platform free of any commitments, expectations and real life obligations. All is well.

The excitement over increased friendship requests, vicarious satisfaction by seeing the profiles and snapshots, and obligation free contacts cannot bring in the warmth of a well-nurtured friend or relative,  living in the vicinity. It is equally necessary to have friends and relatives in real life who are physically proximate to us, who listen to us, share with us and support us in ‘real time’, face to face. There is a need to have a ‘network neighbourhood’ and the local social network should overtake the virtual social network. The deleterious impact of overdependence to the virtual friend network is the decreased time spent with friends, neighbours and relatives who stay nearby. Indeed, we become ‘isolates’, though claim to be a socialite in the cyberspace. 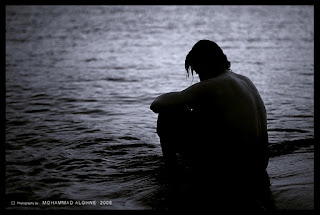 (Picture courtesy: impulse.org.in)
The above happening is also a strong indication of the highly artificial relationship structure and interactions in the organizations we work. Colleagues need to build relationships of mutual sharing and support. Employers should not forget that they can play a crucial role in building healthy ties within the organization and they need to extend their support to activities that can make employees more active socially in a society plagued by selfishness, unhealthy competition and professional jealousy.
One of the worst quotations I saw in my office entrance the other day. “Pressure in Work brings Perfection in Work”. My sympathies to my organization!

“Laugh, and the world laughs with you;
Weep, and you weep alone.
For the sad old earth must borrow it's mirth,
But has trouble enough of its own.
Sing, and the hills will answer;
Sigh, it is lost on the air.
The echoes bound to a joyful sound,
But shrink from voicing care.

Rejoice, and men will seek you;
Grieve, and they turn and go.
They want full measure of all your pleasure,
But they do not need your woe.
Be glad, and your friends are many;
Be sad, and you lose them all.
There are none to decline your nectared wine,
But alone you must drink life’s gall.

Feast, and your halls are crowded;
Fast, and the world goes by.
Succeed and give, and it helps you live,
But no man can help you die.
There is room in the halls of pleasure
For a long and lordly train,
But one by one we must all file on
Through the narrow aisles of pain.”

(Poem ‘Solitude’ by Ella Wheeler Wilcox
Published in 1883 in New York Sun for which she received $5 for her effort)
Sibichen K Mathew
By sibi at 4:40 AM