(Isn't it worth to pick up some of these to sharpen our leadership skills?)
(This is not a ‘political’ article, but an academic writing on leadership styles)

(Since the focus is on the personality of Narendra Modi and not on his position as a Prime Minister, with due respect to that honorable position, I address him Mr Narendra Modi in this article) 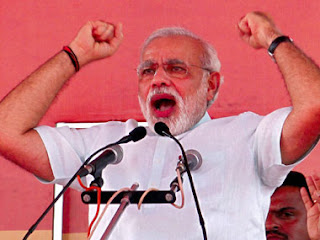 “Compared with what we ought to be, we are only half awake. Our
fires are damped, our drafts are checked. We are making use of only
a small part of our possible mental resources. . .men the world over
possess amounts of resource, which only exceptional individuals push
to their extremes of use”.

One needs the grit to push things in the dormant minds and mindsets. To put it differently, we need men of Grit to sustain the dream of every man and to ensure that they don't lose hope.

A gritty individual’s path is not one that is smooth. But his passion for long term goals gives him energy and vitality to overcome the hurdles.

Mr. Narendra Modi  does not talk about years but about an era. According to him, his vision is not limited to this century, but to an infinite future. 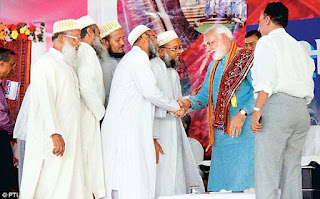 The forbearance may not be an important attribute if the society or the state exists in a unipolar, homogenous and mono-cultural environment. The going is tough in a multipolar, heterogeneous and poly-cultural environment. In a society that has historical, structural and cultural stratifications, disparities and prejudices, it is a herculean task to promise oneself as the cure for all related issues. This requires unlimited patience, unconditional preparedness to collaborate, and tolerance to ideas and ideals one was not familiar earlier.

The biggest challenge is to slow-pedal on the sensitivities  that brought an individual the power, without displeasing the individuals and institutions that cling to a unipolar view.

Mr. Narendra Modi has taken conscious efforts to transform himself from a mono-cultural, unipolar and homogeneous worldview to one that is inclusive. Many times, the transition that is slowly happening in the thought process is expressed not in as many words but in silence. 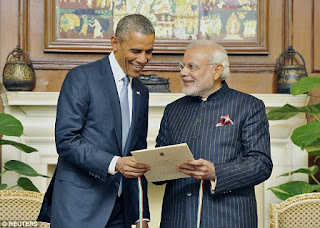 Simplicity, modesty, naturalness,  and effortlessness (I mean, the ease) in interactions are hallmarks of unpretentious leaders.

I don't refer here to a person’s words, dress (there was too much unwarranted sensation surrounding it), or even lifestyle. One need not demonstrate his modesty or simplicity by showcasing a Fakir-like way of life. It is not the way one dresses, the mode one chooses to travel or the house one stays that really symbolizes one’s simplicity or humility. People could use such symbolism to deceive the people with mediocre definitions of austerity and modesty. Real simplicity and modesty lie in a person’s ability to assimilate ideas, to respect sentiments, to take steps to become more tolerant and to be inclusive with people who try not to come near due to lack of trust.

Mr Narendra Modi has a personality that continuously strive to be less pretentious by taking conscious steps to reach out to people who are still not convinced about his credibility. 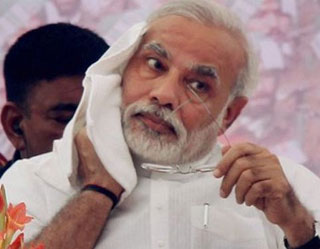 Indefatigable spirit exists in anyone who persists tirelessly to reach any goal. It can be an attribute for a king as well as a thief. But the quality gets recognition and the individual gets reverence if the goals pursued are for the common good and achievable only with considerable mental stamina, inspirational leadership skills and ability to guide others to cross all the hurdles on the way.

When the battlefield is tough, the objects are far, the environment is unstable and the time is limited, one has to run a marathon without slowing down.

The promises of Mr Narendra Modi have implications and ramifications that are long term,  are aimed at changes at both micro and macro level, and can achieve only through transformation not only at the level of state, society, institutions and communities but at a very personal level of each individual. This requires continuous and simultaneous efforts at all levels.  He could be accused of ignoring one level or focusing on another level. The challenge lies in prioritizing the right one at the right time and convincing all stakeholders about that. To satisfy everyone, there is a need to work more and more, alternating between different levels. 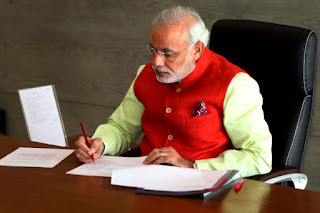 There is nothing extraordinary about doing something that one is supposed to do or completing a task that is assigned to one. But performing it diligently merits recognition. Diligence characterizes proper understanding of the task, taking an ethical position, commiting to produce the best, determining to excel in the task at hand, avoiding latent and unintended consequences of the action, reducing the harm to the minimum, and ensuring long-term benefits and sustainability even at adverse conditions.

Every leader aspires for applauses, votes, and awards and these can be grabbed easily when the people are looking for quick results, short term gains and magic formulae.  It is not difficult for smart leadership to give what people want. It can satisfy the ‘dominant’ interests with relative ease. However, what is difficult is to provide solutions that are enduring, inclusive, aimed at common good and that inflict least harm.

Mr Narendra Modi is trying to have an attention to detail so that policies are comprehensive and offer enduring solutions. The challenge is to maintain a speed that cannot compromise the ‘substance’ while giving wide publicity to the ‘form’.  Only through diligence can one work on each task, if one is not craving for instant populism. That might be the reason that no work could be initiated on certain promises until the tasks at hand are given proper shape to implement. 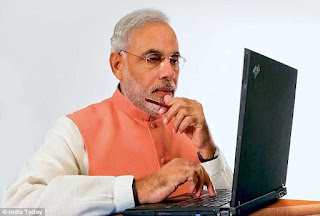 If you want to deliver something that is very challenging and exceptional, you can’t have a -‘please-all’, lax and ‘anything goes’ - leadership style! You cannot keep condoning mistakes. You cannot dilute the tasks or the strategies.

It is not a blind pursuit for perfection, but a determination to follow the blue print, if that is absolutely essential to achieve the goals.

Mr Narendra Modi, puts his iron hand on certain things irrespective of the criticisms. There is a danger! Satisfying the specific interests and becoming vulnerable to pressure groups could make him deviate from what he wants to do. 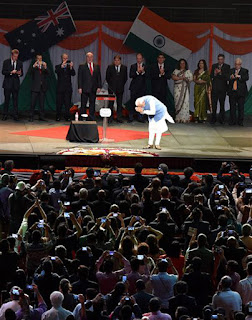 Ethnocentrism has a negative connotation in sociology and anthropology. They say that it is characterized by cultural relativism. The simplest definition of ethnocentrism could be this: to judge other cultures by the standards of the culture one has brought in or one is affiliated or one admires. In an era where cultures are corrupted through ‘unhealthy’ acculturation and assimilation, there is nothing abnormal if one tend to uphold one’s cultural values, if they have the potential to be inclusive and are aimed at happiness and  prosperity and can ensure peaceful coexistence of various communities and cultures.

The negative connotation of ethnocentrism vanishes when the proponents, advocates and practitioners of a particular culture takes the finer universally productive attributes to a wider world and during the course, internalizes the virtues of other cultures and integrate the same in the home culture.

Mr Narendra Modi, according to me, is a passionate advocate of what I chose to call ‘ethnocentric globalism’. He is keen to explore, recognize, appreciate and accept values and ideas dissimilar to the home traditions and culture. He becomes a winner when he identifies and successfully promotes the universally replicable knowledge rooted in his home culture and when people globally take note of them. 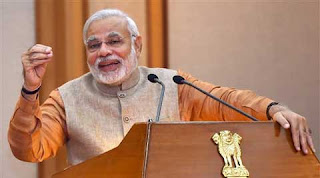 What is eloquence? The dictionary meaning is ‘the ability to speak or write in an effective way’.  In a quote attributed to William Jennings Bryan, it is said that, ‘Eloquent speech is not from lip to ear, but rather from heart to heart’.

A leader is to demonstrate his eloquence in his speeches not by his exceptional language proficiency, his British accent, well prepared speeches (by ghost writers or otherwise) or by the captivating body movements. All of these may be important to some extent, but not central to a successful speech. A good speech comes straight from the heart, has clarity in expression and impresses the audience.

Mr Narendra Modi has demonstrated to various national and international audiences that he can speak from his heart effortlessly in a language, style and content that most people understand and get inspired. 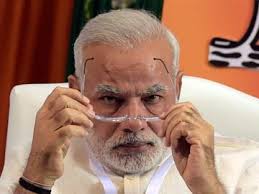 Firmness and determination are not ‘electives’ for an efficient leader, they are essentials. The leaders should be commanding. For this purpose, he should command respect from most people in his team, though some in the team could be jealous and over-critical.

Resoluteness coupled with ethical sturdiness can bring in credibility. A leader who has faith in his own capability will not waver when faced with tough situations.

Mr Narendra Modi, so far, has given an impression of being a resolute leader who is strong, firm, focused and goal-oriented. There could be accusation of ‘one-man show’ or dictatorial style. But these are natural responses when the leader wears the shoes of path finder himself with not many sharing his strategies initially, though might catch up later. 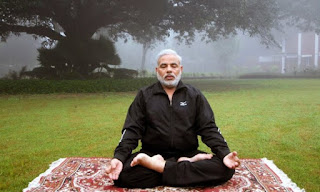 The cult of leadership nurtured by spirituality has not been well received in recent history. That is mainly because of its link with religion. Thus, spirituality became one of the most misinterpreted words across cultures and disciplines. Though religion and spirituality could be inter-related, it cannot be used interchangeably. Spirituality has a strong status independent of religion.

Plato could not visualize a leadership other than a spiritual one. Nietzsche also believed in a spiritual leadership by the philosopher-king. According to Professor Philip Sheldrake, modern spirituality deals with the ‘deepest values and meaning by which people live’. It need not be essentially religious in nature.

Mr Narendra Modi, is a devout Hindu from his early childhood. He has been brought up learning scriptures of that tradition and got trained through strict discipline. He has decided to contribute his life in the service of the nation. As any person getting into any vocation could be influenced by his education, training and background, Mr Narendra Modi also could be influenced by the value systems and awareness internalized by him while formulating effective means to achieve the goals. If the devoutness boosts his creativity, efficiency and understanding of society, and if it is not against public interest and does not harm common good,  it is very positive and need to be appreciated.

Disclaimer
The aim of the above article was not to showcase Mr Narendra Modi as a saint or as Mr Perfect, as there is none who qualifies for such adjectives in this world. This article does not proclaim that all his predecessors were imperfect or they never had any of these qualities. I am not a sympathizer of any organization that is political in nature.

More on Leadership by the author: Read When the Boss is Wrong