Why I hate March!

I hate March not because it brings bad omen. I hate it because it gives me miseries and pains, unlike the other eleven months.

I hate March because it is a month full of targets. I wake up each day of March with a lot of unpleasantness. Why all deadlines are fixed for March? Which deadline I need to meet that day? How unpleasant for me to make others unhappy in my pursuit for hitting the targets? Then who is happy in this game? Even the target setters have their own targets to achieve. What is the ultimate result? Smiles or tears? 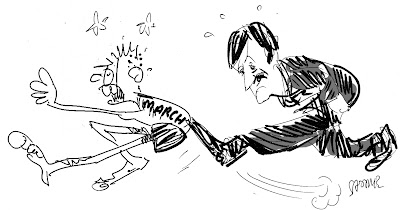 I hate March, because of examinations. It is testing time for kids of all age groups. One would get confused seeing the syllabus of these kids. One would seriously think. Why the hell are these topics part of their curriculum?. What did we gain by studying this stuff in our school days? What did we lose by not studying some of this stuff in our school days? The March-suffering is not limited to the examinations of one’s owns kids, but of many others! Because there will be a spate of leave applications from your subordinates who are also worried parents. Files will stay motionless in many desks

I hate March because it is the time to queue up before the schools. It is also a time for admissions and long waits outside the rooms of the Principals. (See my article ‘The ordeal called school admissions’)

I hate March because of the continuous receipt of marketing calls by many executives. I feel really sad after giving an impolite response to those nice youngsters who call at odd hours due to the pressure for targets!

I hate March because my banker gives me a call in March to say that I am no longer a priority customer. He says I failed to maintain a ‘privileged minimum balance’

I hate March because I am forced to plan the summer vacation. It is always very difficult to arrive at a consensus! And where is the time to think! By the time we decide, tickets are all over!!

I hate March from my school days! It was in March that our dear creator took away my dad from me! And that was Good Friday Eve.

March thus reminds me of Crucifixion. But I wait optimistically with the hope of resurrection in April!
(Read comments of readers below)

Why I start loving March?