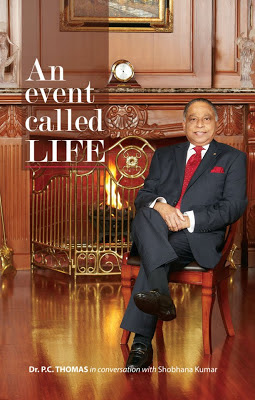 He was a passionate teacher all along. Though, as a strict disciplinarian he earned the nickname ‘Pinching Commander’, he was (CLICK TO READ FULL ARTICLE -->)
a teacher any student or parent could frankly share any problem with anytime. He is ever grateful to many mentors whom who came across later in his life. He used every such opportunity to sharpen his skills, to focus on his goals and to create fresh benchmarks for him.  ‘Thomas can build an empire out of a fruitful conversation’: One senior IAS officer remarked after observing how Thomas utilized an opportunity given by him. It is very interesting to read his narration of his encounters with people and certainly the readers would get motivated with those experiences shared in the book.

Thomas is a visionary in the field of pedagogy. He is pained to see that the divine profession of teaching has long been given up over other lucrative careers and has lost the pedestal it once held. Interestingly he believes in the advantages of rote learning followed widely in Indian educational system. However, Thomas, who successfully introduced four different streams of internationally recognized patterns of learning in the Good Shepherd International School, located in the beautiful hilly town of Ooty in Southern India, aspires for a perfect mix of various learning systems to derive excellence. Latest addition to his diverse ventures is the Good Shepherd Finishing School located in the same Campus spread over 90 acres of verdant hills.

Dr Thomas is known for his sincere involvement in various charitable activities. However, one would not find any detailed narration of those philanthropic initiatives. Thomas believes in the great biblical verse,’ do not let your left hand know what your right hand is doing’. He has been a sincere Rotarian all along and he never viewed it as a means of gaining acquaintances or establishing fruitful business networks. As Rotary International Director, he brought in several new projects for leadership promotion, public welfare and organizational effectiveness. Dr Thomas and his team at Good Shepherd International School and Dr P C Thomas Foundation supports more than 1500 families, who are mostly from the disadvantaged sections of the society residing in the nearby villages for their livelihood.  Thomas has narrated his deeply gratifying moment when he was conferred the ‘Service Above Self ‘award, the highest honour bestowed on a Rotarian. If someone asks him, from whom he drew inspiration for his work, he would quote the words of Harry S Truman: ‘It’s amazing how much you can accomplish if you don’t care who gets the credit’.

Dr Thomas recounts the support and care of his life partner Elsamma Thomas while he climbed every single step in his life. Now, he says, his daughter Julie Pradeesh has stepped in, almost effortlessly to give him a helping hand in completing his mission.  Thomas believes that troubles and ills are because of choices and prayer helps one make the right choice.

The book is a primer for anyone who wants to achieve success in life. He has very vividly narrated the unique strategies that he developed to achieve success. One could immensely benefit from the experiences shared by Dr Thomas, as many of these practical tips for success would not be available in any motivational best sellers in the market. Shobhana Kumar has done excellent work in reproducing the valuable words of Dr P C Thomas into a beautifully readable format. This book could be a valuable addition to the library of all educational institutions. All young entrepreneurs would also find this book informative and inspiring.

You may also like other recent book reviews by Sibichen

Aleph, Paulo Coelho and my friend: The journey within

Julian Assange: A Criminal or a Champion of Open Society

Dancing with Maharaja: An inspirational story for civil services aspirants

Evolution of modern India: A voyage