Speeches by the dignitaries and the art of outsourcing


The recent Fareed Zakaria episode has sent warning signals to the people who have mastered the art of plagiarism. I do not wish to judge what he has done as a genuine mistake or as a pure and deliberate intellectual dishonesty. I also do not wish to argue that it  is a result of any professional envy. But, it has sent a message to many who hesitate to acknowledge the source from which they have lifted the content literally.  May be it was a sheer coincidence that on the same day one of the vibrant blogging communities in India detected a few blog posts where patterns of systematic and merciless copying were done.

Recently I was editing a few articles submitted by some high ranking officials for a souvenir. It was very unpleasant to see some glaring plagiarism by two of them (who lifted portions from Wikipedia) without even acknowledging the source. Drawing ideas from others to substantiate one’s point is fine. But one can’t lift several sentences from another person’s work and express as his own and fail to acknowledge the original contributor or source even in the references. This has happened to some of my blog articles as well. In spite of a warning that they are copyrighted, I found that extracts from my blog have been lifted by others. Fortunately for us, through Google we can track such clever practices.

Now I am on a different but akin topic now. That is about the ghost writers and their unaccountability. I somehow feel that some of the highly paid writers and high profile dignitaries who face terrible deadlines and time constraints are in the habit of outsourcing their writings, reports and speeches. This can land them in serious trouble if those people who write on behalf of them have compromised on the originality of the text they wrote.

The profession of ghost writing is not a recent phenomenon. In this era of outsourcing, along with the Business Process Outsourcing (BPO) and Legal Process Outsourcing (LPO), we now have outsourcing of writings of any kind: Speeches, theses, dissertations, editorials and messages. Outsourcing of theses and dissertations are very popular among students of some of the universities where neither the student nor the guide is capable of proving or disproving any hypothesis or has any inclination either to make an experimental or exploratory or descriptive study independently. The entire work is given as a comprehensive contract to a ‘professional thesis writer’ who has mastered the art of ‘content analysis’ of works done on similar themes and can liberally  lift the extracts meticulously.  One could only sympathize with their utterly worst performance during the public viva-voce examination. As theses and dissertations are increasingly being uploaded over internet, one could possibly detect the plagiarized content without much difficulty.

Our busy leaders need to be worried now. Most of our senior leaders from all fields, viz. corporate, politics, bureaucracy, agree to give speeches and lectures to several audiences. Many are invited to speak every day to different audiences and sometimes more than one speech on the same day. Most of these speeches are delivered through reading from a prepared written text and lasts for 20 minutes to nearly an hour.  Can we believe that these busy leaders prepare these speeches themselves? 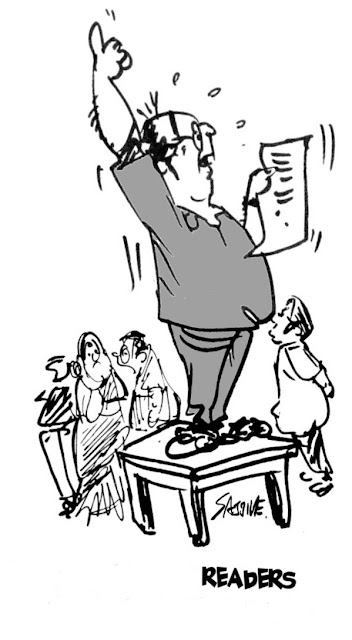 I used to believe during my college days that
some of these leaders are indeed geniuses. One of the  functionaries once came to inaugurate the birth centenary of a local educational leader who was not well known even outside his tehsil.  I was flabbergasted by the versatile and eloquent speech given by the chief guest that contained very minute details from the life of that unknown man whose centenary was being celebrated. The audience were moved by the speaker’s narration of how he was influenced by that local educational leader.

It was only later in life I found the secrets of such eloquent speeches.  Drafts of most of these speeches are sent in advance to the Chief Guest’s office well in advance by the organizers themselves. Some studious politicians and bureaucrats would ask their secretaries to do minor tinkering, editing and censoring on the text submitted. Others will read them as it is. I understand that most of these leaders read the text for the first time when they deliver the speech. Is there any better term than ‘dishonesty’ to refer to this practice? Who are they fooling? I have over heard during many meetings that some smart organizers telling others about what the speaker is going to speak next. What an embarrassment!

No doubt, all dignitaries are important people and they hardly get time to prepare text for long speeches. But, then, why should they make long speeches first of all? Is it mandatory that they should read out texts prepared by the organizers for that occasion? Why should they want to give an impression that they are the reservoirs of all knowledge under the sun? The ideal thing would be to have one of the organizers read or present the important aspects or achievement  or background related to the event before the address by the dignitary. That would become a formal introduction about the subject or object of the event and create awareness among the dignitaries, audience and the media. That can be followed by brief comments or observation or advice from the dignitary as the chief guest of the program, based on the information already shared in the meeting coupled with his own personal reflections if any. Such a practice would look more genuine and sincere.

Another deplorable and equally shameful practice of the important dignitaries is to issue messages for publication in important souvenirs, books and periodicals. They tend to send long messages to the seekers for publication. It is justifiable to ask for a background note on the program, project or occasion and draft their messages. But many times, messages are fully drafted by the seekers themselves and submitted for the valuable signature of the dignitaries. Instead of issuing such long messages, dignitaries considering the scarcity of time before them, can issue messages which are very brief but original prepared by the dignitaries themselves based on the background note submitted by the personal staff or the message seekers.

Famous American writer Gore Vidal said: ‘Today’s public figures can no longer write their own speeches or books,and there is some evidence that they can’t read them either’.

(Caricature Courtesy: My friend Sajjeev)
(You can forward this article by email to others or can link to Facebook or Twitter by clicking the buttons at the end. Click Comments to give your views)

You may also like to read following articles in cyber diary on speeches
Tongue has no bones: The need for speech therapy
Speeches that changed the world
Indian history through speeches.
By sibi at 5:34 AM