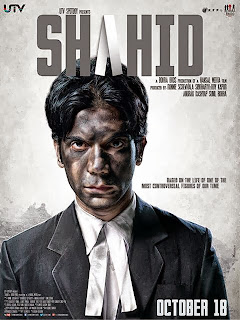 The other day my friend Homi, who is a leading counsel for many global entities, sent me a draft deed of a Charitable Trust he and his friends proposed to start, for my comments. I read the deed and was impressed by the noble purpose of the proposed Trust. The main objective is to render assistance in the cases of the wrongly accused and convicted persons and the reformed criminals who do not have anyone to help. Later, when I watched the movie ‘Shahid’, I was convinced about the need for such initiatives to save several innocent lives languishing in police lock-ups, prisons, and long pending legal bottlenecks and inquiries.

‘Shahid’ is a movie one should not miss. And I want you to see this in a movie hall rather than waiting to watch it in the mini screen or in the DVD player. I don’t say this because of any great digital experience or any multidimensional visual experience in the cinema hall. I sincerely want the producers of this fantastic movie to get their returns. When there was a long queue to get tickets for the movie being shown in the adjacent hall, there was hardly anyone to watch ‘Shahid’ in the large multiplex where the movie was screened. After just a few minutes into the movie, my wife and I wondered how such a wonderful movie didn't attract the average moviegoers.  The answer lies there itself. The mainstream viewers are satisfied by the mediocre movies rather than high quality productions.

Based on the real life story of a human rights lawyer Shahid Azmi who lost his life in his mission to defend an innocent person, the movie very vividly and interestingly depicts the prejudices, fallacies, and injustices in the criminal justice system. It is not just in the fascist and the dictatorship systems, innocent lives are targeted and tortured. Even in many so called democratic countries this is a practice very few would like to question. Investigating agencies can charge anyone with an offence on the basis of an allegation, accusation, suspicion or surmise. He can be raided and arrested. His family members can be subjected to harassment. Bails can be indefinitely denied stating that the investigations are pending. Meanwhile, there will be a frantic search to cook evidences to justify the action of the prosecution and to impose a punishment.

Watching a good movie is a delicious treat for our senses and sensibilities. Instead of watching movies with nauseating dialogue, cheap comedies, oft repeated themes, and digital circuses, we should watch movies like ‘Shahid’. Sometimes, such movies will sensitize our hardened hearts and we would learn and enjoy real acting, gain awareness of what is actually happening in our surroundings, and make us think loud to be proactive. ‘Shahid’ showcases an unadulterated presentation of reality in a very beautiful manner. You might ask, if is so close to reality, why should we watch? You are right! But we know that reality would bite only when it is re-told by someone else, because most of us would like not to accept reality as it is.

I recommend this movie not just for its bold story-line, but for the superb direction and outstanding performance of all the actors. The expressions of Raj Kumar Yadav who played the role of Shahid cannot go away from you for a long time after watching the movie. Baljinder Kaur ‘lived’ in her role as the mother of Shahid. I have no words to describe her marvellous performance. Prabhleen Sandhu, as Mariam enthralls us with her mature performance and expression of finer emotions beautifully. KayKay Menon as ‘War saab’ did a wonderful job. Everyone in this movie acted fabulously and one should congratulate the director Hansal Mehta for this. He won the Best Director award for Shahid at the 13th New York Indian Film Festival. The film has been produced by Bohra Bros Productions Pvt Ltd, AnuragKashyap Films and Paramhans Creations.

Now, check-up whether it is running in the cinema hall in your place and get prepared to use (not spend) 123 minutes of your valuable time!

See other movie reviews below: