'Adultery'- A Review (A disappointment too!)

I am an admirer of the writings of Paulo Coelho for the last several years. I also owe him for the huge traffic (about 16000 page views in three days) for my review of Aleph in my blog, mainly because Paulo Coelho talked about that in his website.

Let me repeat what I wrote earlier while reviewing the book ‘Manuscript found in Accra’ by Paulo Coelho here:  Alchemist had touched my heart. Aleph had refined my soul. Veronica decides to die gave me so much pain. The Zahir triggered in me more questions about the worthiness of relationships than answers that can console. Eleven minutes taught me about the love beyond lust. The winner stands alone tried to dissect my personality and left me in loneliness.

I had the same excitement when I picked up Coelho’s latest book ‘Adultery’ from a book stall which forced to sell it at 25% discount because the illegal replicas were available in the street for one-fourth of the price of the original.

I finished the book within a day making full use of a long intercity travel. As the return flight touched the ground around midnight with an unusually strong jerk, I was on the last page.  I too felt a strong jolt within. Where did Coelho ultimately take the reader?

Novels are written artifacts for the consumption of readers. People read them mainly for entertainment, information, relaxation, and inspiration.  Coelho’s books gave these in plenty though the last one viz. inspirational content was the predominant reason for the popularity of his books. So naturally, readers who are driven by the stereotypical expectations would look for the same element in every work of Coelho. However, ‘Adultery’ was different. But that is not the reason for my worry.

Let me share the theme in the book very briefly without giving any vital clue about how the story ended.

Linda, who is in her thirties, is a journalist with a leading newspaper in Switzerland. She is married to a ‘rich, charming and intelligent’ man. According to her, she always wore the best clothes that money could buy thanks to her ‘husband’s limitless generosity’. She had two lovely children. Yet she felt depressed often. She was in search of something that could lift her out of the routine life. She perceived new hope after the unexpected encounter with a childhood friend who became an important politician. Later one could see the lady with frequent mental aberrations reflected both in thoughts and action and an uncontrollable drive characterized by lust, jealousy, revenge and frustration. Like the ‘Strange Case of Dr Jekyll and Mr Hyde’, she found herself to be on the one hand honest, kind, caring and professional and on the other hand impatient, irritated, and jealous. And, quite surprisingly she has a husband who said, ‘I love you. I would endure anything, absolutely anything, to always have you by my side’.

Certainly, some of the Coelho fans would find the book slightly distasteful. But, moral character of a work cannot influence an assessment of the story. Certainly, it is not mandatory for any author to give a message in his work, though it could emerge as he unravels a story. Readers could possibly draw insights on the human experiences and form his own conclusions if he considers reading a book of fiction inspirational, educative or therapeutic. In short, It is for the readers to search for ‘moral of the story’ if they want.

However, it is true that many writers and critics of literature had a different view. The debate on the relation between literature and morality existed for centuries. Plato acknowledged that ‘a fictional text can be a receptacle of morally instructive significance’. Plato argued that if the art (we may add literature also here) does not teach morality and ethics, it would be damaging to his ‘Republic’. Aristotle believed that plot, character, thought, diction etc. influence the audience’s (let us add readers’) catharsis (pity, fear and/or satisfaction with the work). We know this for sure when we read authors like Dostoevsky and Shakespeare.

In his book ‘The Great Tradition’ (1948)  F R Leavis argued that there can’t be great art (and literature) without serious moral purpose. While he rejected ‘Madam Bovary’ (1856) by Gustave Flaubert for its lack of ‘moral seriousness’, he found the works of George Eliot in line with his thought. Famous British theatre critic Eric Bentley had said, ‘Literature deals with morality but does not necessarily, does not qua literature, help you to be more moral, either by precept or by example’.

My view is that the terms ‘moral’ and ‘morality’ are very relative and one cannot possibly have a universal, spatiotemporal interpretation. What is considered moral for one could be absolutely immoral for another. But every piece of work, whether it is a best seller or a non-moving stock or one that contains material which is blasphemous, obscene, libelous, or false, there would be a definite cognitive and affective impact on the reader. Therefore, to me, Coelho’s ‘Adultery’ is consequential to that extent for substantial number of readers.

When I read ‘Adultery’, I got reminded of the story and its depiction in the book ‘Madam Bovary’  (1856) by   Gustave Flaubert, which I mentioned above as a work scrutinized by F R Leavis when he analyzed the relation between morality and literature.  Emma (Madam Bovary), in order to escape the dullness and emptiness of “provincial life” goes to experiment her romantic fantasies with other men. The thrills of cheating followed by anxieties and tensions did not stop her from pursuing the pleasures further. We see Linda in Paulo Coelho’s book not much different. 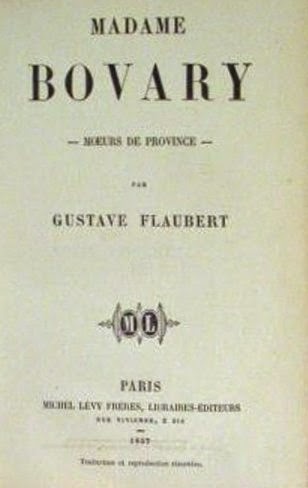 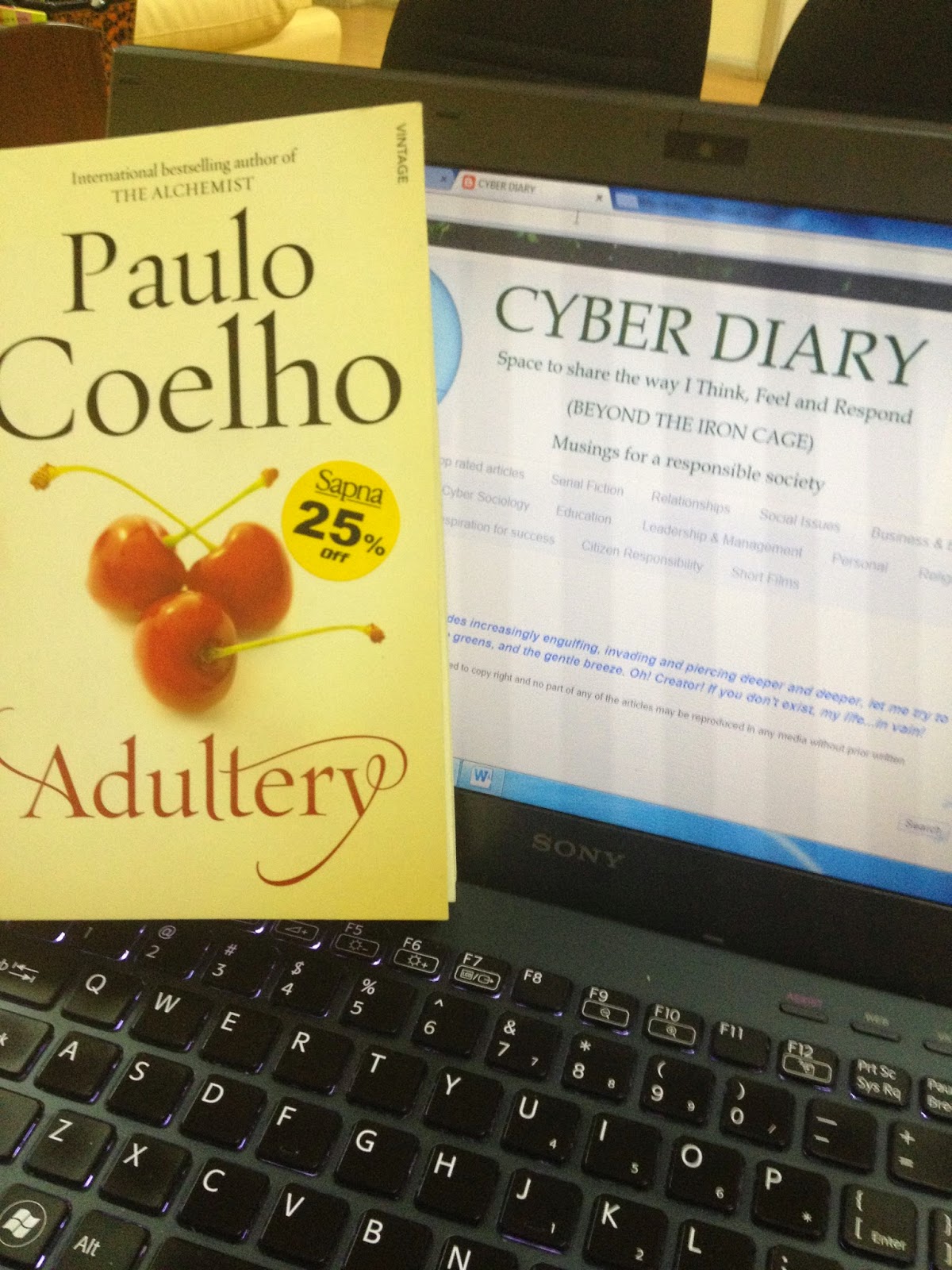 The language is beautiful as in most books by Coelho. The ‘moral’ policeman within me wished that the book had an ‘A’ rating on its cover to restrict it to children below a certain age group. Of course, I am not speaking from a monastery which is cut off from the open-access world. But many adults who prescribe Coelho’s books as compulsory reading for young students would not prefer to see them read Coelho’s narrations of fantasies and private acts of two consenting adults in this book. (Like movies, why not have an adult rating for books too?). Anyway, this is a trivial issue.

The main character seems to be mentally ill. The readers would draw a conclusion that the author attempts to project her as one who represents multitude of such women in the modern society. The author has shown that restlessness, lack of contentment and boredom, if not properly tackled and understood, could lead to unintended actions and abnormal mental status. The author creates confusion among readers whether Linda is after love or lust. One would doubt whether the author started the writing with one projection of the main character and later thought it can have a different projection and a climax (was there any climax?).  Dissatisfied with the last page, I flipped again to look for some post script or epilogue! There was none.

I am sure the author himself would wish to tell the readers that the theme is not adultery. But why then he chose that as a title? Perhaps, the author or the publisher had a different idea when they selected the title without considering the fact that millions of copies of Paulo Coelho’s book can be sold even without a title.

Unlike the previous books of Coelho, I found something seriously wrong with the flow.  For me it was felt as if the author has sandwiched a few extra pieces here and there after he finished stitching the cloth. One example is the section that dealt with the explanation for love in the letterof St Paul to the Corinthians. A clear ‘balancing’ attempt!

Sorry for being an uncharitable reviewer of Paulo Coelho this time. The exercise was indeed painful for me too! Though the book cannot be one of the bests by Paulo Coelho, it is definitely deserve a top position among the best seller fictions in the market now.

Those who want to read my review of ‘Aleph’ by Paulo Coelho click below:

Aleph, Paulo Coelho and my friend

Read my other book reviews below:

Julian Assange: A Criminal or a Champion of Open Society?
Dancing with Maharaja: An Inspirational Novel for the Civil Services Aspirants
Built on Trust: The living legend who magnified an event called LIFE
Speeches that Changed the World
Evolution of Modern India -An interesting voyage with speakers who made history
Tamils, The Tamilians and the Tirukkural
A new world order and global war in 21st century?
When trust is sold
Choose the book and start living
By sibi at 8:35 AM