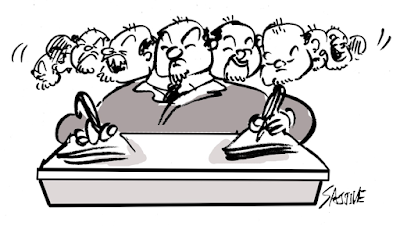 Intelligence is a good attribute of an efficient boss. If the boss is exceptionally brilliant in conceptualization, planning and implementation, that would be a boon for the organization. But when the intelligence is coupled with obstinacy and rigidity, then it would turn counterproductive.

Hussain leads about 400 managers in his large company. He believes that his intellectual acuity is a lot more superior to every other person in the organisation at his level in organizational hierarchy and below. He believes only in top-down approach and never encourages any suggestions from below. He justifies his action stating that what he does is in the best interest of the organization.

If the sole aim of bosses like Hussain is to maximize benefits for the organization without any focus on the development and welfare of the team, there will be resentment from the team. The team members would regard him as too shrewd and manipulative.

It is written in Tao TeChing as follows:

‘It is hard to lead
When we try to be too clever.
Too much cleverness undermines group harmony.
Those who lead without such strategies
Bring blessing to all’

N R Narayana Murthy, Chief Mentor and one of the founders of Infosys wrote the following* in his letter to shareholders:

“Many intelligent people possess a high ego and low patience to deal with people less capable than themselves. Leaders have to manage this anomaly very carefully, counsel these errant people from time to time, and allow them to operate as long as they do not become dysfunctional and start harming the organization. If they do cross the threshold, it takes courage to inform the individuals that their time in the organization is over and that they have to leave.”

Andrew Campbell and two other scholars analysed the question ‘Why good leaders make bad decisions’. They argued that important decisions made by intelligent, responsible people with the best information and intentions are sometimes hopelessly flawed. They found that some leaders were affected by three factors/biases: a) the presence of inappropriate self-interest, b) the presence of distorting attachments, and c) the presence of misleading memories.

Hyper-intelligent leaders have the tendency to stick on to their own judgments even when they are presented with a different view. Some are uncompromising in their beliefs and positions and are guided solely by their own past experiences. They are adamant in their views and not willing to change. They are stubborn as mules. They tend to justify that they are right when the mistakes and negative fallouts are pointed out. Even when it was ultimately proved from the outcome that they were wrong, the hyper-intelligent persons would find a number of intelligent reasons to attribute the failure to other factors.

The reason for the above is the feeling of superiority based on an excessive estimation of one’s intelligence coupled with an underestimation of the intelligence of people around. Because of this, the hyper-intelligent bosses tend to ridicule, intimidate, and ignore others.

There are bosses who take credit irrespective of the outcome of a particular action. They attribute their involvement for the success. When the action resulted in a failure they would say ‘I had warned that it would be a failure’. Rosabeth Moss Kanter who is the author of the book ‘Confidence’ called such behaviour of leaders the timidity of mediocrity.

If the people below the boss feel that their boss won’t listen to them even if they try to convince, what about the colleagues, the advisers or the bosses of the boss? Will the boss listen to them? Scholars Kelly and others have found in a study that as power increases the tendency to take advice decreases; even when that advice could help them to perform better or make better decisions. This phenomenon of egocentric discounting of advice is also highlighted by Yaniv. Bill Gates said: ‘Fear should guide you. I consider failure on a regular basis’.

Omniscient bosses are not assets, but liabilities for organizations which aim at nurturing their young leaders for better prospects for themselves and the organizations.

Prescription for you, the boss

It is important to understand that intelligence has nothing to do with the position in the hierarchy. Many times inputs from persons whom you rate as ‘less intelligent’ can lead to better outputs. A truly intelligent leader identifies, appreciates and taps the perceptiveness and intuitiveness of people around him.

Don’t feel intimidated by a hyper-intelligent boss. None can claim that he is omniscient. You must not lose confidence with the indifference and rejection of overconfident bosses. You keep contributing your best irrespective of his recognition.

Precept for the Organization

Organizations should establish practices that promote creative ideas and suggestions from below. The collective wisdom is far superior to the wisdom of an obstinate individual. Hyper-intelligence coupled with massive ego and rigidity can destroy an organization.

The signs of recovery

In an era of crowd sourcing, a leader who accepts and acknowledges views and creativity of the team will be respected for his social intelligence.

*For full references and to know more about the wrong bosses, read 'When the Boss is Wrong: Making and Unmaking of the Leader within you'.