Tamil, the Tamilians and the Tirukkural


I am a fan of not only the Tamil language but also the Tamilians in general. My fascination towards the language increased as I started learning it. First it was out of an urge to excel in work though there was no career compulsion. Later it was a personal admiration after knowing the richness in that great language, both oral and written.

I was posted in Tamil Nadu and as part of a sensitive job handled by me, I used to come across many handwritten notes in Tamil. Instead of always depending on the team members I wanted to understand the content myself. I bought a book ‘Learning Tamil in 30 Days’ from the Higginbotham's book stall at Coimbatore Railway Station. I did the theory at home and the practical in the field. My first learning assignment was to read all posters of films pasted on all street walls across the city. As a young man I was equally fascinated with the Tamil movies as well during those days. I could read all bus boards and all writings on the signboards and other hoardings. Later I started reading printed texts though it took much time to complete each page.  But I could understand the content of all letters, petitions, papers and documents easily and that facilitated by job.

If a Tamilian goes to the nearby state Kerala and try to speak Malayalam, the cynical mallus (not all but the typical ones.) will try to laugh at him and tease him. But if a Malayali goes to Tamil Nadu and tries to communicate through his broken Tamil, they would not get offended. On the contrary they would appreciate the attempt. That was my experience.  I was encouraged by my Tamil friends whenever I tried to speak in Tamil. I don’t know whether I can generalize this. But the point I am conveying is that an attitude of inclusiveness and openness can break the barriers created by language in a country like India that is severely divided over linguistic affinities.

My inspiration for learning Tamil was my teacher Shri A Selvaraj, who retired as a Chief Commissioner under the Ministry of Finance, Government of India. He is a Tamilian but had mastered the Malayalam language. He spoke fluent Malayalam and read a large number of books in that language. He could engage in very in-depth debates on most of the leading Malayalam literary works with any literary critics from Kerala. I remember this incident. A leading Malayalam actor was summoned to his office in respect of an important matter. I happened to enter his chamber for an emergency work, when he was ‘interrogating’ the actor. To my surprise I found him engaging in an intellectual debate about a movie remake of a Malayalam classic, and he pointing to the actor how many vital elements of the original story were missed in the movie. (There were two results for the ‘interrogation’:  First, the actor understood his deficiency in that particular area of literature. Second, he admitted his omissions for which he was called ‘to question’ and did not challenge the concerned proceedings. )

Let me not divert from the main topic.

Whenever I attended any function in Tamil Nadu, I heard speakers quoting extensively from the book ‘Tirukkural’. Even ministers and parliamentarians from Tamil Nadu drew from it whenever they wanted to make a point in parliament or in many other meetings. Union Minister of Finance from Tamil Nadu never missed a reference to Tirukkural in his budget speeches. Though learned about the book in School I never knew much about this great work. Thiruvallavar , an acclaimed Tamil poet wrote this book around 30 BC. He had courageously pointed out the need for correcting certain defects in the society of that time. Unfortunately some of those defects still lie in the society of today and hence its contemporary relevance. Tirukkural is considered as the most translated work perhaps after the Bible and the Koran.

I wanted to read the Tirukkural, but the Tamil work was a little tough for me to understand.  After many years, on  request my friend Alagiri procured the English translations of Tirukkural by Dr N Mahalingam and Dr S M Diaz.

Dr N Mahalingam wrote in his introduction: “Though the Tamil language saw the birth and growth of countless works on various subjects, none can be said to be comparable to TIRUKKURAL. There is none to compare with this, even in the literature of other languages”.

Dr V C Kulaindaiswamy in his foreword said:
“Tirukkural is  a treatise on the ‘Art of Living’ born out of the culture of the Tamil society. It is the contribution of a genius that the Tamil country has produced. …..The basis for its immortal and universal appeal is to be seen in its secular character, clarity of thought, depth of understanding, perception of the unshifting foundations of human life, penetrating insight into the essentials and the capacity to present them in an extremely generalized form, avoiding carefully any particularisation’. 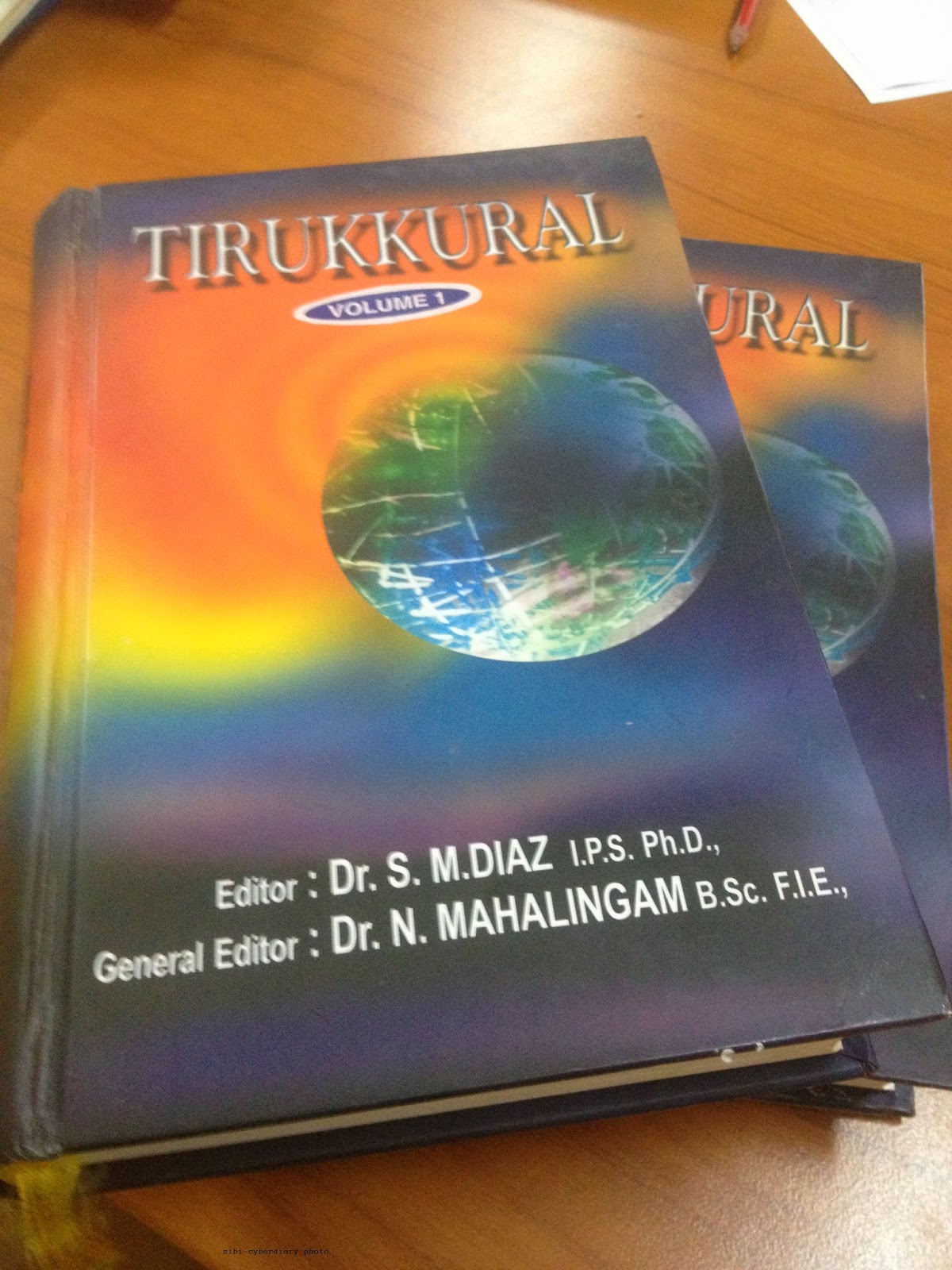 The work consists of 1330 epigrammatic couplets grouped into 133 chapters, of ten couplets each. It comprises of three books: 1) The first book ‘On Virtue’ consists of 38 chapters deals with various themes that include ‘In Praise of Rain’, ‘Asceticism’ and ‘Virtue’. The second book contains 70 chapters that deal with ‘Wealth’ covering themes such as government, polity, economy etc. The third chapter contains 25 chapters and the main theme is ‘Love’.

Dr S M Diaz, a former Indian Police Service officer, who is also a scholar of Bible, took pains to translate Tirukkural to English and has compared specific verses with other sacred texts like the Bible and the Gita. He argues that the work of Tiruvallavar differs vitally in many ways from the works of Plato and Confucius, but even more radically from the concepts of State polity presented in Arthasasthra by Kautilya (Chanakya), and in  Prince, by Machiavelli.

Taiwanese poet Hung Ching-Yu, who writes under the Pseudonym Yu Hsi translated Tirukkural into Mandarin. In his speech after receiving the Tiruvallavar award at Chennai he said: ‘I acknowledge the Tirukkural as a universal scripture.’
The concepts propounded by Tiruvallavar in Tirukkural are based on Dharma of a universal character in time and space.  The volumes extensively deal with many subjects. Some (out of a total of 133) are given below:

Chennai based Central Institute of Classical Tamil (CICT), an autonomous  institute under the Ministry of Human Resources Development of Govt of India has taken efforts to provide translations of Tirukkural in various languages. This is available in many Indian languages. Dr Tarlochan Singh Bedi has translated the classic into Punjabi.  The Tirukkural has been translated into Latin, German, Mandarin, French, Polish, Russian and many other foreign languages.

If you have not read it so far, please step into any of the big libraries or buy a copy for yourself.

For English translation by Dr Diaz a, please contact Ramanandha Adigalar Foundation, Kumaraguru College of Technology Campus, Coimbatore -641 006 or Varthamanan Pathippagam, 40, Sarojini Street, Chennai-17.  Other versions of the book are available in Amazon and Flipkart. But ensure that what you buy is an authentic translation of the full work and not an abridged one.

(e-mail subscribers of Cyber Diary may go to the home page to get the updated version of this article along with comments.)

To see all articles in Cyber Diary click HOME
By sibi at 4:22 AM