Another fatal infection in your backyard:Scrub Typhus! Beware!

My family and me spent a few days during our Christmas-New Year holidays at my in-laws’ house. It was a happy time as we celebrated their wedding anniversary and the birthday of Father-in-law (Daddy). Just a day before we left, Daddy complained of slight fever. As per the physician’s advice, he took paracetamol for a few days. Since the fever was not coming down, paracetamol was given as I.V.  The blood test was repeated to verify attack of any virus and nothing adverse was noticed.
We constantly enquired over phone as we lived in a different city. Temperature became normal for two days and then again went up. He was admitted to a nearby hospital and mild fever continued for a few days more and doctors there had no clue about the disease. They said, it could be a urinary infection and started giving medicines for that. They also put him in ICU to check his cardiac status as his BP shot up. As they found the ECG and Echo normal, they told mummy that the fever will go once the urinary infection is reduced.

Meanwhile my wife took the night bus and reached the hospital in the early morning and found Daddy almost collapsed in his bed, unable to move or speak. The transition to this stage was in a matter of a few hours. Till the previous night he was moderately active and was speaking to everyone. My wife who is also a doctor asked the physician of the hospital about the status of the patient. He said, ‘he is suffering from dementia’. My wife did not believe the physician’s story of urinary infection and dementia and told him so. She said she is taking him out of the hospital to get him readmitted in a better hospital. The physician didn’t like someone questioning his theory and angrily disappeared from the scene.

Daddy was rushed in an ambulance to a nearby multi speciality hospital (SUT Hospital). By that time his kidneys and other internal organs had malfunctioned. It did not take more than a few minutes for the physician Dr Dhanya to zero in on the most probable infection: Scrub Typhus. She immediately started the appropriate antibiotic without waiting for the blood results which confirmed the disease after 24 hours. Daddy was put under life support in the ICU.

What is Scrub Typhus?
We need to be aware and beware of this as it is fast spreading all around.
Let me summarize below what WHO tells about the infection:
Scrub typhus is an acute, febrile, infectious illness that is caused by Orientia (formerly Rickettsia) sutsugamushi. It is also known as tsutsugamushi disease.
How it is transmitted?
Scrub typhus is transmitted to humans and rodents by some species of trombiculid mites (“chiggers”, Leptotrombidium deliense and others). The mite is very small (0.2 – 0.4mm) and can only be seen through a microscope or magnifying glass. Humans acquire the disease from the bite of an infected chigger. The bite of the mite leaves a characteristic black eschar that is useful to the doctor for making the diagnosis.
In India
Scrub typhus is prevalent in many parts of India but specific data are not available. There have been outbreaks in areas located in the sub-Himalayan belt, from Jammu to Nagaland. There were reports of scrub typhus outbreaks in Himanchal Pradesh, Sikkim and Darjeeling (West Bengal) during 2003-2004 and 2007. Outbreaks of scrub typhus are reported in southern India during the cooler months of the year. Scrub typhus is a reemerging infectious disease in India. It occurs more frequently during the rainy season. However, outbreaks have been reported during the cooler season in southern India. Certain areas such as forest clearings, riverbanks, and grassy regions provide optimal conditions for the infected mites to thrive.
What are the clinical symptoms of Scrub Typhus?
The chigger bite is painless and may become noticed as a transient localized itch. Bites are often found on the groin, axillae, genetalia or neck . An eschar is often seen in humans at the site of the chigger bite. The illness begins rather suddenly with shaking chills, fever, severe headache, infection of the mucous membrane lining the eyes (the conjunctiva), and swelling of the lymph nodes. A spotted rash on the trunk may be present. Symptoms may include muscle and gastrointestinal pains. More virulent strains of O. tsutsugamushi can cause haemorrhaging and intravascular coagulation. Complications may include atypical pneumonia, overwhelming pneumonia with adult respiratory distress syndrome (ARDS)–like presentation, myocarditis, and disseminated intravascular coagulation (DIC). Patients with scrub typhus often exhibit leucopenia. 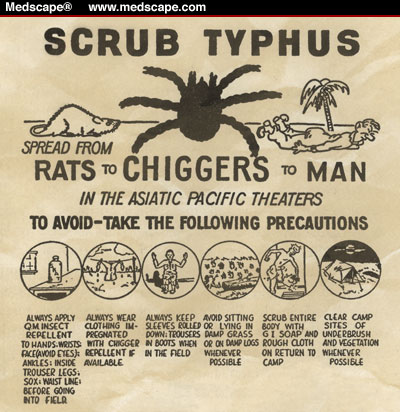 Image: Medscape.com
How to differentiate scrub typhus from other diseases?
Differentiating scrub typhus from other forms of typhus as well as from fever, typhoid and meningococcal infections is often difficult during the first several days before the Scrub Typhus initial rash appears. The most common signs are similar to a variety of other infectious diseases (typhoid fever, murine typhus, leptospirosis and dengue fever, etc.) which should be taken into consideration. The geographical location of scrub typhus, the initial sore caused by the chigger bite, and the occurrence of specific proteins capable of destroying the organism (antibodies) in the blood, provide helpful clues and are useful in establishing the diagnosis.
What diagnostic tests are available for confirmatory diagnosis of scrub typhus?
The diagnosis may be confirmed by a laboratory test such as serology. The cheapest and most easily available serological test is the Weil-Felix test, but this is notoriously unreliable. Fifty per cent of patients have a positive test result during the second week. This test is now being replaced by a complement-fixation test. It is a serological test to detect specific antibody or specific antigen in a patient’s serum
What is the effective treatment against scrub typhus?
Scrub typhus is treated with antibiotics. The drug most commonly used is doxycycline; but chloramphenicol is an alternative.
How to prevent it?
It has been shown that a single oral dose of chloramphenicol or tetracycline given every five days for a total of 35 days, with 5-day non-treatment intervals, actually produces active immunity to scrub typhus. There are no effective vaccines for scrub typhus.
In endemic areas, precautions include wearing protective clothing. Insect repellents containing dibutyl phthalate, benzyl benzoate, diethyl toluamide, and other substances can be applied to the skin and clothing to prevent chigger bites. Do not sit or lie on bare ground or grass; use a suitable ground sheet or other ground cover. Clearing of vegetation and chemical treatment of the soil may help to break up the cycle of transmission from chiggers to humans to other chiggers.
Measures to prevent the infection
The early diagnosis of acute scrub typhus can greatly reduce the chance of life threatening complications and guide optimal therapy. Awareness and education activities should be targeted at schoolchildren, teachers and women groups in endemic areas. Involvement of community-based organizations in prevention and control of scrub typhus is important.
Rodent control is a multidimensional activity that requires multisectoral cooperation. Different control strategies such as trapping, poisoning and use of natural predators are in practice. Allowing weeds to grow around buildings also encourages rats and mice. Good sanitation in and around buildings creates an environment that is less suited for rodent populations. Proper sanitation may not eliminate rat populations but often can prevent them from flourishing in high numbers. Repeated increase in rodent population even after the use of poisons is a good indication that habitat modification is needed.
(Source for information http://www.searo.who.int/entity/emerging_diseases/CDS_faq_Scrub_Typhus.pdf)

The late diagnosis had resulted in the failure of internal organs. With systematic treatment and repeated dialysis, he could be revived. He had to be in the hospital for about two weeks. Though he is back home, it will take a few months for him to recover fully to good health.

A few points to note!

Never delay a blood test if the fever continues for more than three days.

Make sure that the patient’s tests are done in a reputed Lab with all facilities.

Don’t think of saving money by going to a small hospital with inadequate facilities. It will be fatal! It was a big mistake that Daddy insisted on getting admitted to a small hospital (advertised by them as speciality hospital) where there were no proper medical assistance.

Never completely trust your medical insurance company! They will promise to give you money and will vanish at the time of billing!