Murphy, an eminent sociologist wrote in the British Journal of Sociology that ‘by focusing on differences between humans and other animals, sociologists have lost sight of all that we share with them'* . Noske shared a different view**: ‘the social sciences tend to present themselves preeminently as the sciences of discontinuity between humans and animals’. Corwin R. Kruse of University of Minnesota after analyzing the views of above scholars wrote: ‘those who study animals in human society have a potential truly to influence sociology’.

See below, what Shri Madhavan Nair, a former member of India’s Revenue Board and a very distinguished civil servant shared with me.

“7th April: Two pigeons start a survey for locating a nest between the glass sliding window and air conditioner base unit on the sunshade on the 7th floor. Caressing each other, combing each other’s feather, tidying up their own feathers, teasing and running around in princely gaits, spreading wings stylishly in mock fights, walking with eyes right as in formal parades , many a filmy scenes get enacted.

9th April: Twigs carried and preparation of nest starts. One, probably the mother is always on the inside of the nest arranging twigs in a round formation and the father flies in and out supplying twigs. They go in rounds, pulling and pushing the twigs between them to put them in a satisfactory engineering arrangement. The nest needs to hold together in a round shape to prevent the eggs from rolling over and to accommodate the mother and also the chicks when they are small. Quite a list of requirements: the same criteria you adopt for your house plan. Both birds leave the twigs on lunch breaks. Everyone needs a break.

15th April: Two eggs found, and nest fully done. Nest high enough to hold the eggs from rolling over. The mother stops her lunch sojourns, stays in the nest to incubate. 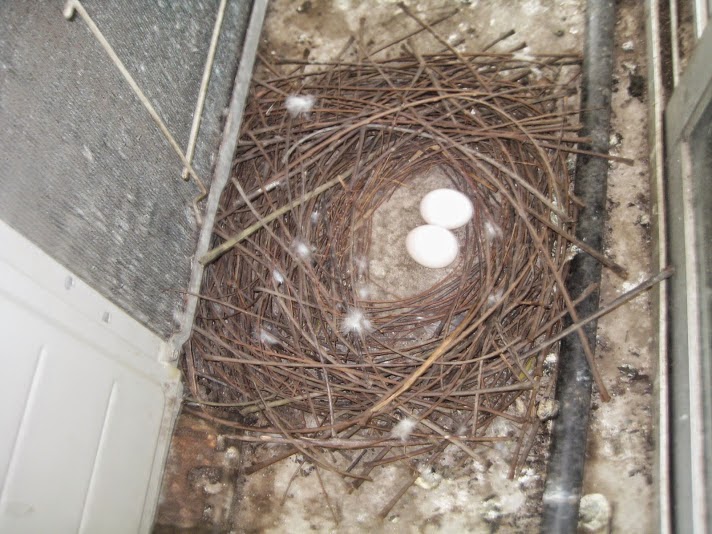 21st April: The male still bringing twigs to fortify the nest and the female in the nest incubating

25th April: (May be the eggs are hatched, that even when I go very near, almost to touch the bird, it refuses to fly away, not willing to take the slightest risk of endangering her chicks.
27th April: The chicks try getting out of the protection of mother’s belly feathers, not allowed by the mother, insisting on giving shelter and warmth

30th April: I find the chicks inside. Another pigeon tries to disturb the chicks (or the female), fought off by the father and mother together. Eyes of the chicks not yet open... white bundles of wool with pink shades underneath!Feeding by both to chicks from own milk starts. The “milk” is produced by father and mother in a gland located on the neck and fed by regurgitation. Interestingly it is understood that the in the case of penguins only the father can produce milk. Quite advanced in the matter of gender equality in those icy terrains! 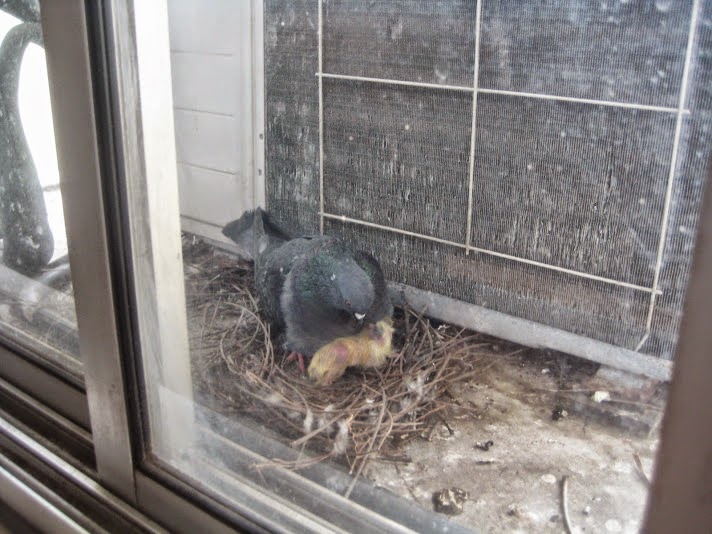 5th May .Brown colour appears on the body of chicks, showing their true colours slowly!

8th May:  Father feeding alternatively the two chicks by rumination.

12th May: The parents not around all the time, the chicks grow to be half size or more, well formed feathers found, flapping wings and feeble noise asking for feeds. Cleans own body.

13th May:    Flapping wings before mother for food,  cleans own body with beaks. The activity rate of two birds differ much. The difference in basic nature becomes obvious.

15th May:   A stray outsider coming and trying to eat the food found near the nest. The scared birds scream in low voice. When I stand near the glass window the new bird is not scared. But maybe hearing the sound of the chicks though quite low in volume by our standards (pigeon spectrum may be different) one of the parents arrive to drive away the intruder. The healthier chick flaps wings for exercise. Parents, not very keen to feed through mouth. Refuses feed in spite of cries, probably wants them to eat from the feed on the floor. Whenever feeding from beak, pushes the chicks’ beaks down to ground to give them practice of eating from ground. Somewhat like human babies being taught to use straw glass to drink instead of the feeding bottle. The biggest of the chicks is the most active one too. The bigger one easily learns to eat from the floor, the small one trying to eat from the beak of the bigger one as he has not yet got the cue to eat from floor. The bigger one combs the feathers of the small one, caressing it, sibling love being expressed in animal kingdom. 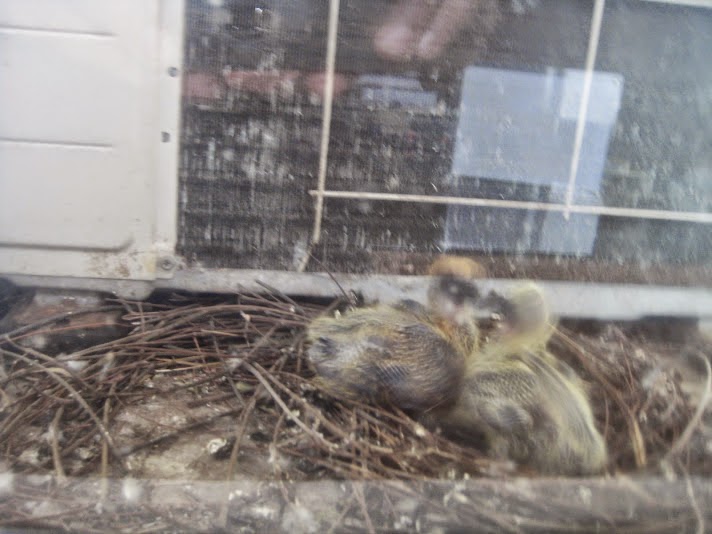 19th May: The quills on the wings get black in colour. The chicks differ much in size. Mother regurgitates food, sometimes drops it down so that the chicks can eat from the floor. Difficult to snap a picture, as she would run away when I go near. Chicks still  don’t move out of nest area to follow mom. Flaps wings along and call by voice. 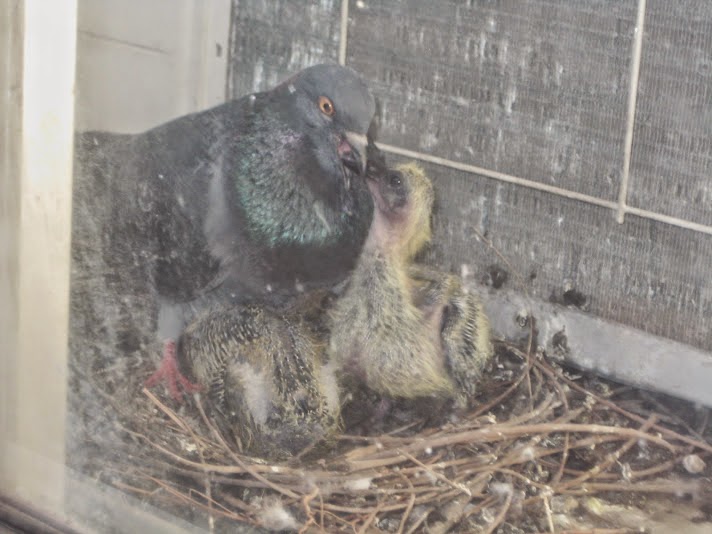 21st May:  Parents try to goad the chicks out of the nest.  Exercising wings and whistling softly the chicks express their fears and refuse to follow parents outside the safe territory of the nest. The parents try to lead them out by feeding from the fringes of the nest and walking farther as if to demonstrate how to walk. The chicks are still afraid to get out. Parents walk past without feeding to force the chicks follow. Makes a show of picking food from outside the nest to encourage them to follow suit.

22nd May: Another family scouting to get the same area to set up nest. Parents trying to woo the chicks out of the nest area. Both parents and chicks together on a rainy day cuddling together and combing the kids feathers... quality family time!

24th May:  The big one also moves out and eats from new zones. The mother’s feeds are unfailingly alternating .The bigger chick trying to flap wings strong enough to lift itself up. Are parents trying to take them to the edge of the floor..on this 7th floor? The smaller one seems more adventurous now to explore beyond the nest.

26th May: When I come after two days holidays only one chick found.  No information on the other whether he flew off or was preyed on by some predator. Seems that the smaller one is the one that survives. Parents both sitting with the one left an cradling and petting it, combing the feathers and also pecking each other as if to comfort on the loss of the other. Cannot click a pic as they go away  when I approach for a picture , but coming back immediately…mourning time ?, not venturing out. No more coaxing the baby to come out .Both parents mimic the egg hatching sitting position, as if to remember and share the old days.

29th May: The baby chick is not seen it has been probably taught to fly off. The parents settle down to lay the next set of eggs. In the afternoon I get the nest area cleared so that no more nesting takes place there. But there after in the evening an egg is laid even though there is no proper nest.

30th May: One trying to sit incubating and the other trying to bring twigs to make a nest around the egg .2nd June: After holidays now   it is two eggs again on a thin nest .still adding strength to the nest .... 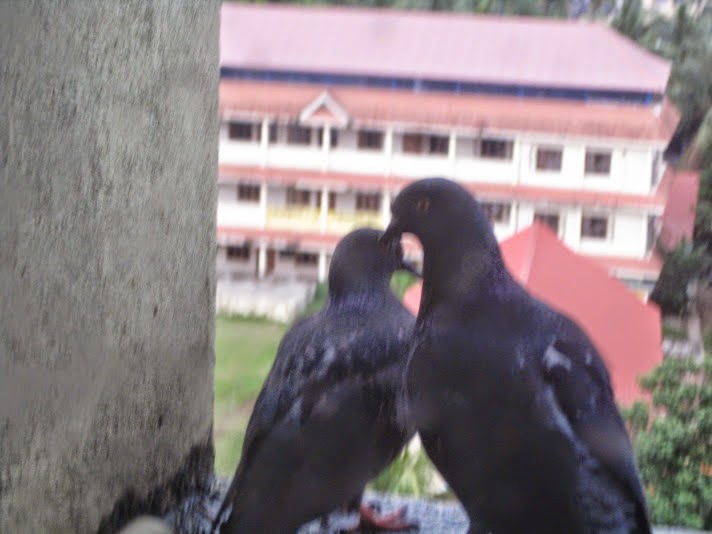 What a beautiful narration of fine demonstration of love and care! Very well written indeed! A wonderful documentary could have been made on the scenes.

While writing this blog post, I got a call from my friend Sindhu. When I shared what I am blogging on, she instantly keyed a few lines on what Madhavan Nair sir would have thought!

The other day, I saw a short 30 min documentary film on the Indian River Tern bird at the River Tern Lodge in the Bhadra Tiger Reserve Project area. The movie was professionally made by the Forest Department. The events in that movie were exactly like what was narrated above. (Click to see another short film on River Tern bird by Amoghavarsha here)

The roof above my study cum balcony area in the residential quarters is a favourite place for pigeons. They disturbed my creative work so much when they move. The roof of balcony is made of a thin sheet by the employer’s contractor. The sound when the pigeons walk, play and fight on that have strong impact on the ears and the mind. I tried to hit at the sheet with a long stick. Initially they flew. But now they are not scared even with my 'hits'. I went to the flat above mine, from which there was direct access to my balcony roof. I threw several buckets of water to remove all the 'construction materials' so that they will find another place. (I didn't harm any pigeon). Nothing happened. The balcony roof still continues to be the favourite 'prosperity' place of all pigeons in the vicinity. And their sound no longer disturbs my creative work.

From the ‘Diary of events’ of Madhavan Nair Sir and the story in the River Tern film, I understood one thing. Human beings are not endowed with any superior emotions, love or empathy more than what is endowed in animals and birds. So, human beings (parents) who do not take care of their children (and vice-versa) and the siblings who do not care for each other are worse than animals. One can see biological altruism that is much more intense and sincere among animals than the men in the modern world. Scientists at the University of Adelaide recently found that unlike what was thought of and claimed by humans for centuries, animals have ‘cognitive faculties that are superior to human beings’.

(Share this article by copying the link in the address bar or by using the buttons given below. Post your comments below or send a mail to sibi5555 [gmail] ). e-mail subscribers may click the home button to get the updated post)
By sibi at 8:30 AM