(This is the English translation of Malayalam article: 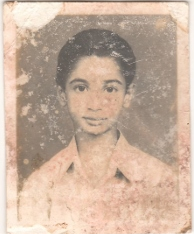 We three; my sister, my mother's younger sister (who was just two years elder to us) and myself were in our grandma's kitchen, with our aunt who was scraping coconut, waiting to get our share to taste. It is then that my uncle arrived with some news. We felt something weird as he called my aunt and whispered something to her, without the usual exchange of pleasantries to us. Before uncle could finish, we saw aunt hitting her head and crying. Out of the three children who were standing in bewilderment, without understanding the head or tail of what has happened, uncle called my sister and me and  put his hands around us and said, "Children, brother (in law) is gone"

We didn't understand his words. We understood that 'brother' who he mentioned is our Dad. But why did he say that Dad is gone? Dad is admitted in the Medical College hospital. Yesterday my sister and I went to the hospital to meet him and we ate modern bread dipped in hot milk with him!
When I met Dad I was reminded of the picture of Jesus which I saw in the church on Palm Sunday. His beard and moustache had grown long. With his head raised on the pillow on the frame of the bed, his face radiated the gentle and sweet smile of Jesus.

But it seemed as if he was swallowing some pain. The sweat on Dad's forehead had a reddish tint. As we were leaving the room, Dad caressed my head. I even heard Mom telling him that she will bring us again after Easter. Then why and where did Dad leave? Why did uncle have tears in his eyes and aunt stop scrapping coconut and lean on to the bed? I didn't comprehend a thing. We went to Anilachechi who would always clear any doubt that my sister or I have. I was five years old then, my sister six, and Anilachechi, seven. But we believed that Anilachechi knew everything on Earth. She told us 'Dad is dead', and cried just as uncle and aunt did. We too started crying; without knowing even the meaning or loss of death and separation.

Good Friday
As Mom lay down at the back seat of the Ambassador car which belonged to my aunt at Ernakulam, Dad's mortal remains were on the way to the cemetery. Dad, in his white shoes, beautifully made white crown, white shirt, holding cross and rosary looked so handsome. (Later, how many times I wished to lie down like that! Everyone carrying me in a coffin and me, lying there, handsome like Dad!) After 33 years of personal life and public life and Passion, where did Dad go?

Uncles carried me one after the other. Why everyone who have gathered here looking at me and weeping? They should've looked at Dad and cried! Everywhere there was smell of incense and agarbathis. From that day my Mom, my sister and I hated that smell completely. We wished to run away from its stench. Also from the Good Friday mass!

Easter Sunday
Though my Mom, sister and I hated Good Fridays, we never hated Easter Sundays. We stood in front of the crucified Christ, in hope.

"I am the resurrection and the life; he who believes in Me will live even if he dies.” The priest read the Gospel loudly. From that time onwards, I am in that hope. When is Dad's resurrection? It has been days since Dad has left. I looked curiously at the picture of Jesus raising Lazarus from the dead. Jesus who raised Lazarus can surely raise Dad too.

Season of Easter
The same priest, who buried Dad, reads. “ He appeared to the disciples who were going to Emmaus”. Surely Dad too will appear one day. Could he stay without seeing us?

Every Sunday my eyes went to the top of the altar of the church. It was written there; 'This is the House of God and the Doorway to Heaven.' There were two doors on either side of these words. My eyes were fixed there. If this door opens to Heaven, certainly Dad would be inside. He will definitely look down at least once. But he didn’t come, not even once to look down. Did Dad forget us as he is enjoying in the midst of Jesus and angels? Didn't he get any of the letters that was neatly written on white sheets of papers and buried under the earth?

I waited, for the blow of that trumpet! For my sleeping Dad to wake up!