The tongue has no bones: The need for 'speech therapy'!

Tongue has no bones. But it is the sharpest weapon and it can injure many. But the worst consequence is when it destroys the user himself badly. That is what is happening these days with the omnipresent digital capturing devices all around.

For many people, microphone is a weakness. The moment a microphone is given, their main mission is to say something that can amuse the audience. Very few have the self-control to abide by the time allotted to them. They know that routine facts are never of interest to any audience. You won’t get any claps for giving a gentleman talk. For getting the attention of audience, attempt is to do one or all of the following: a) criticize someone’s actions b) dig someone’s past c) leak some secrets d) make some promises e) pull someone’s legs, and if nothing of these are handy, then f) share one’s own mischiefs and blunders. People call the last one, ‘lying on your back and spiting on yourself’. 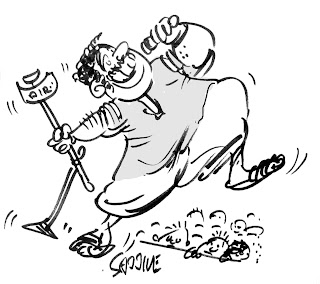 The passionate speaker, who got mesmerized by the excellent acoustics and enthusiastic and encouraging audience, loses control over what he speaks, when he speaks, to whom he speaks, how he speaks and about whom he speaks. The words flow faster than his thoughts, and every word and every gesture of him are captured by the cameras and then transmitted within no time far and wide to alert the subjects of his oration.

Before he comes out of the stage, sharp reactions emerge from even far-flung areas, defamation suits are filed, and arrest warrants are ready. Then he has to go on a denial spree accusing everyone including the reporters, cameramen, and even the microphone for misrepresenting his words. They regret their words privately and justify their stand publicly that they have been misquoted.

Here are a few examples. (Since some of them are still sub-judice, I prefer to say that the speakers have been ‘misquoted’. All are innocent unless they are declared guilty at the end of all judicial processes).

A leader of the Communist Party of India (Marxist) in the Kerala state (known for the first democratically elected communist government in the world) located in Southern India, told in a public meeting that his party had murdered and thus eliminated as many as 13 congress workers a few years back. He reportedly added that his party used to prepare the lists of opponents they want to eliminate and had used contract killers. (See a clipping).   He was arrested by the police on charge of murder.

There are several politicians who have landed into trouble for their criticisms against judgments of the court. A few have gone to the extent of imputing ulterior motives on the judicial officers.  In a speech on the eve of India’s Independence Day in 2012, the head of a state in India criticized the judiciary stating that ‘court verdicts are purchased’. It was also stated that ‘at times favourable verdicts are given in return for money’. The Calcutta high court took serious view of these remarks and advised the public figure to ‘lace her speech with moderation’. 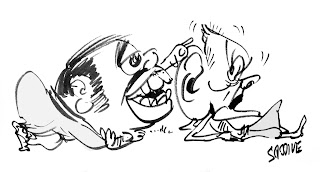 No doubt, political leaders always get trapped by their own words, because they are destined to devote major part of their life talking to public and media, for their own survival and image building. But, media houses are also in search of spice, and they send the reporters who are trained to put sticks and words in the mouths of politicians. Very few political leaders have the capacity and skill to escape from the media. They lose control easily when bombarded with leading questions in the presence of their supporters.

One public figure was quizzed by a reporter for his comments on an accusation regarding sexual abuse by a politician. The minister tried to evade the question, but the lady reporter did not leave him. Finally, the annoyed minister regained his sense of humour and reportedly asked her: ‘Why are you after that person? I think, something happened between you!’

Speakers of Indian Parliament and Assemblies have tough time removing from records those unparliamentary words inadvertently uttered by members in ‘charged atmosphere’ within the legislative houses. Microphone mania is killing!!

How to control our tongue? It is written in the Bible as follows:

‘If anyone does not stumble in what he says, he is a perfect man, able also to bridle his whole body. If we put bits into the mouths of horses so that they obey us, we guide their whole bodies as well. Look at the ships also: though they are so large and are driven by strong winds, they are guided by a very small rudder wherever the will of the pilot directs. So also the tongue is a small member, yet it boasts of great things. How great a forest is set ablaze by such a small fire!’ (James 3: 2-5)

May be, some institutes will come with a ‘speech therapy’ of a different kind for 'outspoken' people. Else management institutes can think of starting a course on ‘Microphone Management’!

(Views are personal. Thanks to Sajjive for translating my thoughts to wonderful cartoons)

Click below to read related articles in Cyber Diary on the above topic:

Speeches by the dignitaries and the art of outsourcing

Speeches that changed the world