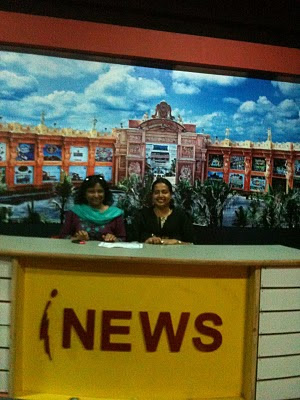 Like most of the young parents who live in nuclear families, we also thought that the art of training the children and upbringing them are ‘trial and error’ as no parent qualified a proficiency test in child rearing. My son’s diminishing interest in academics has worried us. And my wife reminded me frequently of several articles and studies, which admonished TV viewing by children. I started putting restrictions on my son. Meanwhile my newborn daughter got fascinated with TV even when she was on all fours. It was only a matter of just few months for her to displace her big brother. By the time she joined the school, she managed to snatch the unquestionable ownership rights for the TV remote. While my son used to hand over the remote to me with little begging, ending in mild shouting from me, my daughter simply refused to hand over the remote. The addiction to the remote was such that she used to hide it in secret places while going to take bath or while having food. She was fascinated with film songs, movies and tele-serials apart from the cartoons. Since she knows that I am a ‘news addict’ she will put the headlines for me retaining the control over the remote to herself. Our restriction policies miserably failed. My son also started sitting along with her (still the remote was with my daughter) watching movies, film songs and dances. Both of them became serious consumers of all sorts of emotional and behavioural plots and expressions such as romance, violence etc exhibited in such programmes and started forming their own attitudes and opinions about life. They became more influenced by what was seen in the TV rather than what the teachers or we taught.


At this juncture I started slowly introducing my son to the habit of newspaper reading. He was asked to write the news headlines every day after reading the newspaper in a diary. With a little encouragement and frequent reminders, he started writing the news almost every day. His general knowledge improved dramatically. He continued it for a year. As he unconsciously got into the habit of newspaper reading, I stopped compelling him to write the headlines. Now he is in class VI and he is the first person to snatch the English daily from me in the morning. If he does not get time in the morning he catches up in the evening. That has created an impact on the TV viewing. He started watching the news channels.


My son’s interest in reading and listening to news has created a fresh set of problems for me. First is his unending doubt on whatever happening around. Though that can be answered with little bit of updating from my side the second set of questions literally makes me quite disturbed and I fail to give readymade answer. He learns from his textbooks about UN as the international agency, which has the power to ensure peace and discipline between countries. He asks me then why it is not interfering when Israel bombs kill thousands of Palastinis. He asks me is it worth having fight over Kashmir as millions of rupees and hundreds of lives of both countries getting wasted year after year. He hears both Gen. Musharaf and Mr Manmohan Singh speaking of bilateral peace. He asks me why should people protest against the visit of George Bush, the President of a great country. Is it proper to show ‘go back’ signs when another country head makes a friendly visit to our country? He also asks me why can’t big corporates adopt some of our villages? I did not have any immediate answer to any of these and hundreds of other questions he ask me every day.


The third set of problems after my son started having interest in news is related to the investigative reporting of some news channels. Video footages of crime scenes and violence, reports about anti social activities, and scandals and scams about widely respected political, bureaucratic and religious leaders have created mixed feelings in him. There is possibility of children becoming vulnerable to violent images and messages due to viewing of reality footages in the news channels. As stories of crime, violence and different types of abuses are hot cakes for competing news channels, they rarely seem to edit that suitably. They thrive on most explicit presentation of events. Most of the spicy stuff is aired over and over. Repeated viewing of such stuff can result in having a deformed perception about the society around. I had to tactfully persuade to switch the channels when my son watches many such reality shows.


Now, I am relieved when he watches cartoons. I have started encouraging him to watch stuffs like the popeye show, Noddy, Tom and Jerry , Mr Bean or Nicktoons rather than watching the numerous news channels. Both my children seem to laugh and enjoy a lot while watching those stuff. Let them not for the time being, get upset over either the emotional outbursts in movies and serials or the ‘reality bites’ aired in the news channels. Let them face real life as it comes.