Recently I had to visit a government office for some urgent work. Thanks to the out sourcing wave, the reception is managed by a private security guard. He was on the free telephone, chatting with a personal acquaintance. I tried clearing my throat very loudly to catch his attention. He looked up from his glass chamber and reluctantly cut-short the phone and attended to me. He informed the room number of the officer with whom I had taken a telephonic appointment. (Which was obtained after several attempts as ‘all the lines to that office were busy’). 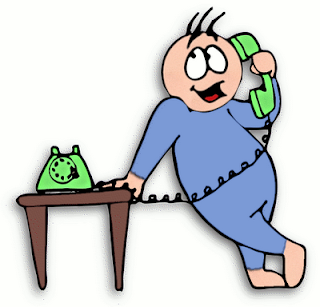 Since there was no peon in the vicinity , I slowly but partially opened the door. The officer is on the phone and I smiled at him while he gave me a passing look . I took a few steps inside. We had not met each other before. That may be the reason for his continued attention to the impressive talk at the other end of his telephone. I thought , he would gesture me for the seat. Realizing that the officer is very much amused by the incoming gossip and also in a mood to part with his own contributions to spice up , I slowly came out of the room. I took the steps slowly, expecting a call from behind to stay back. I went out. One need not expect sufficient chairs for visitors in most of the offices. I walked up and down the corridor reading the colourful posters protesting about the the low salary and heavy work. I went inside the section were the staff were sitting to send my visiting card to the officer. Most of the staff members were busy over the telephones located in their nearest location ( one can mistake the office for a tele-marketing concern) or on their personal cell phones. Others were getting intellectually enriched through periodicals. As most of the personal jobs can be done through telephone, there are very few absentees these days in several offices. Truly, there is full capacity utilization for one office resource viz. telephones. A few were on the computers and was difficult to make out whether they were on personal network or on official tasks.

I told an elderly official, who might be the staff supervisor, about my appointment with the officer and requested him to inform the officer or send my visiting card inside. Before I took out the card from my pocket he told me loudly: ‘Peon has gone to canteen and therefore nobody to take the card inside. And saab is busy on the phone. You please wait near his room till he finishes his conversation or else you may straightaway enter the room’.

I went back and found that saab was on another line. As his concentration and involvement during telephonic conversations were at its best I closed the door and came out. It was about one hour since I entered this office. Thought I can reach him after a few minutes , I went in search of one my colleagues who also work in this office. Fortunately she was available in the room and very happily welcomed me with surprise as we were meeting after about 10 years. As I sat on the chair, she ordered for coffee and then enquired where I am posted and what is the reason for the visit to this city. As I opened my mouth, one of her telephones rang. She continuously said ‘Yes Ma’m, Right Ma’m,Ok Ma’m .. for about fifteen minutes. Meanwhile other phones in the room also started ringing one by one , at alternate intervals. As she about to sip the coffee , which was cold by then, and as I was about to answer her first query , her phone rang again. The voice from the other side was so loud that I could hear the lady. My colleague looked at me and told that she is her office batch mate calling from the other side of the country and continued the conversation. They were talking all topics which amused both of them viz. the promotion prospects, recent divorces and separations among colleagues, problem of domestic servants and mother-in-laws, of womanising bosses , nutty lady bosses, kids’ home works and what not. Even after about twenty five minutes of chatting ( with intermediate smiles at me as if I am also a subject of the discussion or active participant of the conversation) , she was not in a mood to close the call. Meanwhile her cell phone rang and she quickly glanced the number and said to me ‘call from kids. They want my telephonic help for homework’. I gave her a gesture that ‘I will just be back’ and hurriedly escaped the room. Let her think that I had gone to respond to some natural calls.

I walked across the room of the officer. Quietly opened the door and found an empty seat. But quickly heard a shouting from behind . ‘Hey who is that. Don’t you know that you just cannot enter the room of the officer without permission’. I turned back and so the peon who has managed to yell at me while attending to a conversation over phone, comfortably sitting in the supervisor’s chair.

While I was climbing downstairs and passed the reception to go out of the office, the private security guard gave me a warm smile and a salute while his cell phone provided me the entertainment by giving the tune of latest movie number. He quickly turned to his phone while I am about to return the smile.


"Telephone story is relevant and quite revealing.Telephone has become an irresistable intrusion into space and time.Being a communication device it mars communication in person. What a paradox!Let people understand this menace and behave properly.The case is no different in a private office."

(Sebastian monichenjo@gmail.com)
By sibi at 1:25 AM