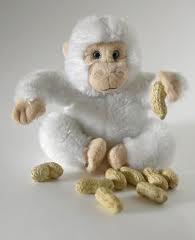 (Picture courtsey: bccbikthus.org)
If you give peanuts, you will get only monkeys. This famous saying is attributed to the French business men, politician and publisher Sir James Goldsmith. Many organizations filled their treasury with sacks of peanuts tagged ‘recession special’ and liberally offered to the homosapiens. But after ‘willingly’ consuming the peanuts, many of them got sick. For some it was uncontrolled diarrhea and for some others it caused severe constipation.
Obese monkeys need balanced diet
Most of the intelligent ones among them got voluntarily rehabilitated for intensive care and ultimately queued elsewhere for roasted peanuts, masala peanuts, and some lucky ones for roasted pappads along with peanuts. But no one got  cookies! Those loyalists who stayed back in the organization did undergo a reverse evolution to a stage and state where they once again: perpetually jovial, naughty, and sneaky. They are restless, and yelled and jumped from branches to branches of the same tree. And they get used to the peanuts and the matching lifestyle. Very contented they are. Who is bothered, if the branches they sit on have dried up? Who cares if there are no new branches!
Monkeys who were fed with peanuts never realized that they slowly became obese due to lack of balanced diet. Obesity has resulted in lethargy, low productivity and laziness. They lost dynamism. Their ideas and contributions were not appreciated by their supervisors who were also affected by the peanut syndrome! Over a period of time one could see a bunch of zombies in that organization, mostly at lower and middle levels.
Does this mean that peanuts are the best diet for those who are in the lower rung of the hierarchy?  Do they deserve something better occasionally?
‘Smarties’ getting Cookies Picture courtsey: popsugar.com
Some large corporates were more intelligent and ‘shown’ a little magnanimity. They lifted the smart, healthy and aggressive monkeys and offered them cookies.  Fortunately there is nothing in law that can prevent the employers from using their discretion in giving what they want to any one they feel like. Some of these giants wanted to convey to the world that they are ‘robust’ in spite of the recession. The monkeys who joined the new tree immediately got used to the cookie menu. They slowly changed their lifestyle to that of homosapiens.  But the danger was imminent. Most of them got fired within a short period citing reasons such as poor performance, misconduct, unwillingness to learn etc.
Three groups of Monkeys (zombies) in Government
Government organizations always have larger share of zombies. Broadly, there are three groups of people in government. First set of people (the large group) entered the ivory tower for comfort and so-called security. The second group (a smaller group), who were already civilized, wanted to be creative and constructive. The third set thought it would be the best business option. All the above categories thrived initially. The first group was contended with the peanuts. Second group slowly realized that they are really in an iron cage where they can’t do anything further. They were affected by the 'learned helplessness'. The third set of people continued to take risks and used the powerful energy derived by them by sucking beyond what is due to them, to extend their empire. Even in such ill-gotten abundance they thought they are affected by the ‘peanut syndrome’ and envied at the cookies elsewhere.
It is neither wise nor practical to give cookies to all (or peanuts to all). Entire economy will collapse in such a scenario. But the most intriguing thing is the wide gap between peanuts and cookies. First, there is huge price difference. Second, grossly disproportionate chunk of money go to provide cookies for a microscopic minority.
What to learn from Bharti Airtel, Mindtree,and Worldcom?
Now, some facts from the ground. Bharti Airtel, a large telecom company, has announced recently that its shareholders have approved an annual remuneration of Rs 70 crore for its Managing Director Sunil Mittal. They call this jump from around 27.5 crore as  ‘an enabling provision’. Doesn’t matter the label. What is in a name if it brings in bags full of money?
It was just a few years back that the Indian Prime Minister Manmohan Singh asked the corporates to put a cap on the salaries to be paid to the senior management.  In India, it has been left to the share holders to decide how much to be paid to their company’s senior executives. The Companies Bill 2009 proposed to remove the 11% cap on salaries of CEOs (still not passed!).
Mindtree,  known for its unique names had an attrition rate of 25% last year, which is one the highest in the industry. Though one study(chartered by the company itself) attributes it to ‘improper communication’, the truth points towards the pay-packet.  But the company is happy with those who are happily stayed back with less pay. But what about the competence?    Worldcom faced the worst situation due to the unethical practices triggered by inefficient accounting and audits.  An IIA Study in 2002 suggested that Worldcom had only half the number executives in its accounting wing as compared to several other telecommunications companies of equal and lesser size. It was also reported that the internal auditors were paid very low salary. ‘Second interim report of the court appointed bankruptcy examiner’, is available here.
Monkeys will become donkeys soon!
Moral of the story is simple. If you give peanuts, you will definitely get many monkeys. But, when you give cookies to people, still some of them will become monkeys in due course. There is nothing wrong in experimenting by giving some monkeys cookies. They might become homosapiens sooner or later. If you continue to give peanuts for long, some may still work like donkeys, very quietly and sincerely. But their cerebral cortex will continue to take good rest.
By sibi at 5:41 AM 5 comments: