·      Beena was the eldest of the four daughters of a rubber tapping labourer from a hilly district of Kerala. Mr Thomas, the physical educational instructor of St George School spotted the athletic talent in this poor, slender girl, while she was in Class 7. The dedication that she made to athletics that day continued for several years. When she won her district, state, and country many gold medals, no one knew that she ran on empty stomach and that her family lived under thatched roof. When an opportunity came to showcase her talent in a prestigious international meet, the selection team and the sports authorities quietly replaced her with another less competent girl who had political backing. Beena’s talent remained in her remote village and is now living as a plantation worker.

This is just a representative case to show how patronage from the powerful can decide one’s future in sports.

·     Indian Hockey team arrived jubilantly after defeating a strong opponent. But they were reportedly ridiculed and humiliated by offering a paltry twenty five thousand rupees per player whereas each cricket team member received rewards in lakhs for a similar victory.
Why this discrimination? Critics say, cricket is big money, honey!

·       India won more than 100 medals in the in the recent Commonwealth Games, held at New  Delhi. Apart from this, the final tally included 45 cases of corruption and more than a dozen arrests.  It was alleged that there is misappropriation and mismanagement of thousands of crores.

The above three are just representative samples of thousands of instances of dishonest, unfair and unscrupulous actions by the powers that controlled the sports in India. The first one is an illustration of how millions of meritorious sports persons are unjustly pushed out of the courts to make way for those who wield power. The second one is a clear indication of how business interests make or break a game. And the third points towards a deeper malaise that increasingly gripped the Indian society. The cancer of corruption has spread far and wide to every institution of society. And field of sports is the latest casualty.

What is common in all the above cases? Power and Money. It doesn’t matter whether there is a politician, bureaucrat, businessman, sports person or a social activist at the helm of the affairs. What matters is their driving force. Either the source or the destination or both could be either money or power or both. Let us analyse this in detail. Before we analyse this in detail, let us try to answer the following controversial question.

Should we make sports leadership out of bounds for politicians?

My instinctive answer is a big NO. But, if many politicians are corrupt, we have as many corrupt bureaucrats, sports persons, activists and religious leaders. There is no sector of the population which is untouched by the evil of dishonesty, nepotism and corruption. We need to rank which profession is corrupt based on the opportunity to be corrupt. Politicians and bureaucrats are at a comparatively vulnerable position to use and abuse money and power. But when the right opportunity knocks at their doors, our sportsmen, activists or the spiritual gurus also quietly tread into dishonest paths for personal gains. We have innumerable examples of unethical practices by persons from each of these professions. Thus the persons don’t matter; but an environment that facilitates corruption and inefficiency matters. What is needed is the creation of a system that insulates corrupt practices in sports. Before I conclude this topic, let me discuss once again if we should ban politicians from heading sports bodies. 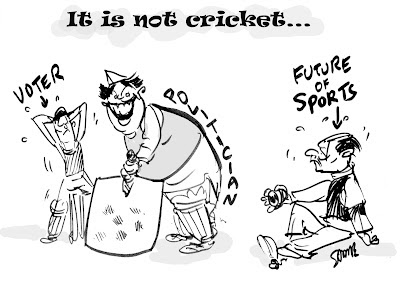 Probably there may not be any other professional label in English language that instantly evokes a suspicious response than the word ‘Politician’.  The negativity triggers such an intense feeling that people started using this noun to anyone who is manipulative, shrewd and deceptive. Even politicians do not like them to be addressed as such, but prefers nomenclature like civic leader, social worker etc.

In a democratic polity, the politicians, whether actually a part of the ruling power structure or not, represents a cross section of society. They are assigned the roles of presenting and solving the issues faced by people. In a representative governance system, ideally, the political leaders decide about the generation and utilization of resources for the common good. Thus by having a politician as one of the decision makers in a sports body would prove to be beneficial for the prospects of sports which should be done within a systemic frame work explained at the end of this article.

Can the leadership of the sports bodies be entrusted exclusively with sportsmen? ….And if they are having political or commercial interest?

Konrad Lawrence wrote: ‘A specialist knows more and more about less and less and finally knows everything but nothing.’

This is true in the area of sports as well. The roles, functions, powers, vision and mission of a large sports body are wide, exhaustive and comprehensive. There are technical, managerial, supervisory, and inspirational skills needed to lead such an organization. Expertise in sports or a particular game is only one of the many attributes to step into the shoes. While a sportsman can assess the needs and priorities through his technical expertise, he also needs professional competence, ethical standing, managerial effectiveness, wider outlook and leadership traits that ensure cohesion and solidarity. If these are present, a sportsman would be the most suitable person to head a sports body.
Unfortunately, as in any other field, sports are also marred by allegations of dishonesty, unethical practices, and nepotism by sportsmen, former sportsmen and sports officials like coaches, umpires etc. That does not mean that there is a dearth for honest, disciplined and visionary individuals among the sports persons. As any other person of similar integrity and competence, sports persons are also eligible for selection to the top leadership of sports bodies. In fact, other things being equal, they would be at an advantageous position as compared to others due to their core competence.

It is a fact that major sports events are not just a platform to showcase healthy competition, but avenues to provide mass entertainment, to make huge profits, for wide reaching advertisements, and to derive opportunities to wield power, and become points of strategic convergence of all of these. Therefore, there are conflicts of interests, promotion of particular interests and suppression of public interest. Being an important party in the events sportspersons do play a crucial role in all of these. This is more conspicuous when the sportspersons either directly or indirectly, manage or control marginally or substantially an event. Though many instances of such unholy nexus between sportsmen and various interests have come to light and available in the public domain, specific references are avoided here as some of these are continued to be disputed legally.

It is clear from the aforesaid discussion that sportsmen with commercial and political interest, latent or manifest, or direct or indirect cannot be a fit candidate for occupying any decisive role in any sports body.

What is imperative today is to create a system in place that formulates clear rules and guidelines regarding the eligibility and fair selection of office bearers of sports body and detailing a clear code of conduct.

Here are some suggestions:

Thus, I would like to conclude my discussion stressing that, the posts of heads of sports bodies, instead of reserving only to the sportspersons, can be given to any person who has proved his integrity, core competence, administrative efficiency, and inspirational leadership traits.


This post has been published by me as a part of IBL; the Battle of Blogs