Of Sunanda Pushkar, Mallus and the Sexual escapades


The paradoxical malayali mindset and related behavioural aberrations were demonstrated in full media glare recently in Kerala’s capital Thiruvananthapuram.  A 19 year old young man made indecent advances to the 50 year old wife of a newly sworn in Union Minister when the jubilant couple were surrounded by hundreds of followers and onlookers. Thankfully, and to the molester’s utter misfortune, the elegant non-Keralite lady managed to make her right hand freed from commotion, to hit at him in rage.

In an interview later to a national TV Channel she said: 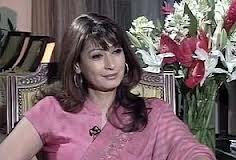 ‘Men feel that in such mob situations they can take advantage of the body of the women and they will grope in unwanted places. In such circumstances, men feel they have a right to abuse or hurt women. Some people told me I shouldn’t have hit him. The ‘politically correct’ thing would have been to smile and grin and bear it. And that’s what our women have been put through for centuries. I forgave him after he profusely apologized for the offence.’

What a shame for  Keralites and  malayali men particularly. Also, what a great lesson she has given to all women who live in and visit Kerala. How many women who travel in public transports have not received such indecent advances from co-passengers or the staff? How many women have not experienced eve teasing on public roads? How many women have the guts to react like Sunanda Pushkar on such deliberate attempts by men?

Kerala is on top not just for its highest literacy rate, life expectancy or lowest infant mortality rate, but for many other shameful achievements. 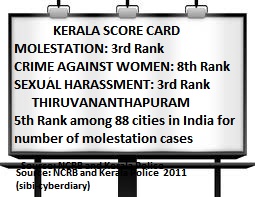 (Number of molestation incidents for 2011, Kerala lost third position to Maharashtra for just 38 incidents)
Some more interesting data from the statistics of National Crime Records Bureau.

Yes, there is steady growth!

Kerala is one of the few places in the world where women outnumber men. For every 100 men, there are 109 women in Kerala.  Even globally, the sex ratio has been negative for a long time. In 2000, there were only 986 females for every 1,000 males in the world. More number of educated women means more incidents of harassment and molestation? What a paradox!

The word ‘Mallu’ (a widely known nickname for a malayali) is a popular internet key word for any sort of sexually explicit literature, images, videos and movies. It is true that Pornography, a world-wide multibillion dollar industry caters to a large number of population since several centuries to fulfil non-intrusively their sexual urges. But what is intriguing is the predominant ‘mallu’ presence in the cyber space (See my article on ‘Mallu Web Culture’). Even movies and videos with erotic overtones are being named as ‘mallu stuff’ irrespective of any other  Indian language in which they are made. This is because of the unique historical background  of Malayalam movies. The directors of many Malayalam movies released in the 1980s and 1990s disseminated new definitions and conceptions for sexuality, eroticism and women. They created a new wave among youth based on misconceived notions about female sexual expectations, misplaced physical attributes of sensuality, and mistaken perception about marital relationships.  This resulted in creating sexual perversions among the youth of those times and impacted their attitude and approaches towards women. This attitudes and behavioural pattern got ingrained in Kerala Society.

The problem got aggravated in due course. In an outwardly conservative society, the double standards and pseudo morality resulted not in reduction of sexual crimes and perversions, but in radical increase in the incidents of molestation, sex scandals, organized sex rackets, sexual harassment etc. Women in Kerala cannot travel alone in public transports or walk alone on the roads after evening hours. Even when they are accompanied by men, they are not spared of the lecherous eyes of men of all ages.

Will giving a vent is a solution?

Noted Malayalam writer Paul Zacharia told once in an interview to my friend  T.S. Sreenivasa Raghavan that ‘a place where one can have healthy sex without fear or anxiety would be welcome’.  It is an absolutely ‘out of the box’ proposition for the conservative Kerala. And morally unacceptable too. But would this be like a ‘placebo’ as believed by Zacharia? Will this save the men suffering from sexual suppression and repression and will curtail the sociopathic behaviour of sex maniacs?   Supporters of the above point towards the licensed service providers in many countries where men go and relieve their urges rather than peeping, leching  and pouncing on hapless ladies. Shall we think of adopting this as a therapeutic approach, without infringing on the moral principles?

(You can e-mail to others or tag the article to FB by clicking the icons at the end. Click COMMENTS below to see all the comments from readers)

Aleph, Paulo Coelho and my Friend   (About child sex abuse)