The Voice of the Hunted: A Review of 'Wisdom of the White Mountain'

The voice of the hunted are suppressed. In every society and culture there are individuals who are destined to live the life of a serf. They are considered ever dependent even when sheer hard work made them step on their shoes. They are used to the humiliating experiences. They continue to bend their heads before the mighty and ever willing to lick what is thrown from the table of the lord even when there is no necessity. They are forced to sing eulogies to the immature successors of the breed of the masters.

The protagonist whom people called ‘Vella Pottan’ in the novel touched me so deeply. This is the story of an intelligent person who is made to believe that he is a dumb moron and in all obedience he acted cleverly foolish throughout his life. His childhood was marred by extreme poverty, discrimination and abuses and there was none to love him. He craved for legitimacy. Gradually he suffered an existential crisis which forced him to question the very meaning of life.

The novel clearly busts the hypocrisy of the social and political institutions and double standards of organized religions including the ones that claim to be the denomination of the suppressed.  The stratification within the religion that preached equality underscored the ubiquitous existence of discrimination against the low born. 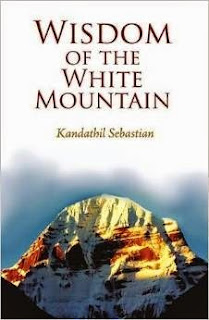 The blurb of the book tells the theme very succinctly:
“Some powerful men-including performers of black magic, underworld gangsters, sleuths, extremist zealots, and sellers of spirituality-chased a powerless, low caste man from a Kerala village through Mumbai, Karachi and Delhi till he finally escaped into the mountain ranges of Himalayas. All of them wanted to capture this man alive and keep him with them! However, none of these men could catch and keep this elusive man, as he always found his way to freedom. In the process of working out his escapes this man also unearthed some important mysteries of human life! Why did some powerful men continuously chase a low caste man? How did the man always find his way to freedom? What are the riddles he solved while he was trying to escape from his captors? Wisdom of the White Mountain is a suspenseful and adventurous story told in the cultural, spiritual and philosophical context of the South Asia. It is also about Karma, Kama and Jihad! It ultimately unravels greed and selfishness of powerful men who mix religion and politics to manipulate common people for advancing personal interests.”
This is a novel that would captivate you for its good narrative. It was very exciting to read the chapters and the book provided curiosity all along. This is the second novel of the author, though looked like a sequel (because of the similarity in the title) to his first fiction ‘Dolmens in the Blue Mountain’. I found this one much more deep, unconventional, and meaningful. It is not about pursuit of happiness, but pursuit for freedom.

The hunted themselves were made to be the weapons in the hands of the mighty to massacre others. They became life-less guns triggered by someone else. They crave for freedom and fight incessantly to reach a free world. However after each battle they realize that they entered another stage of bondage. History tends to repeat itself as the powerful continue to use the powerless for their advantage. This novel has the potential to become a globally acclaimed work for its theme and the presentation.

The author, Kandathil Sebastian holds a doctorate degree in Public Health and Social Sciences from JNU. He is a consultant for various international organizations.  Wisdom of the White Mountain is published by Frog books, an imprint of Leadstart Publishing. Pages 183. Rs 145. US $6. It is available in most online stores.