When Blessed Kuriakose Elias Chavara is being elevated to the stature of a saint, one should not once again make him purely a religious missionary ignoring his role as one of the greatest social reformers India ever had. His sanctification undoubtedly, is a blissful moment for every devotee, but that should not relegate him exclusively to a space within the four walls of the church, monastery, or any religious institution.

Kuriakose Elias Chavara never figured in any History books. He was never a subject matter of historians who attempted to do research on the 19th century social reform movements.

It was Kuriakose Elias who pioneered the social reform movements in Kerala much before Chattampi Swamikal and Sree Narayana Guru. Though the four-fold Varna system as practiced in the other parts of the country was not in existence with the same rigidity, the Kerala society was marred by untouchability and consequent disabilities and deprivations. Large cross sections of people didn’t have access to education. For the first time in the history of Kerala, Fr Kuriakose Elias initiated the task of assimilating the so called untouchables to the mainstream society. He started schools in remote locations for the people from very backward communities. His revolutionary proposal to have an educational institution attached to every church was implemented and that had transformed the entire society irrespective of caste and creed. As there were churches in every part of Kerala, Schools could be started all over Kerala (the term ‘Pallikkoodam’ originated there). Unlike the western oriented educational system started by the protestant and Portuguese missionaries, the schools started under the initiative of Fr Kuriakose Elias introduced Sanskrit, followed Gurukula type of pedagogy, and taught also about the cultural and social values of Kerala society and India.

Many social thinkers and policy researchers of the country may not know that as early as in 1830s Kerala Schools had free noon meal scheme for all the children. It was the idea of Fr Kuriakose Elias to give free meals, clothes, and study materials to the students so that the poorest of the poor and the ‘untouchables’ got an opportunity to study. The success of noon meal scheme conceived and implemented by Fr Kuriakose Elias inspired Sir C P Ramaswamy Iyer and he recommended the scheme to the King for implementation in all Government schools. Now this scheme has been implemented all over the country.

Prof A Sreedharamenon, the noted historian and Padma Bhushan awardee  wrote in a note sent to the Department of Research and Documentation, Chavara Hills, Kerala as follows:
“I feel sorrow for not having been able to study more deeply about Father Chavara whom I have often met in studying and writing (sic) about Kerala history. This note is meant at least in part to remove that sorrow. People like Father Chavara should be given the place they deserve.”

Though focus of this short article is to highlight the role Fr Kuriakose Elias Chavara played in bringing social and educational reforms, one cannot omit his unique contributions to the church. The prominent among them are a) the efforts to avoid schism in the church, b) establishment of retreat centres for the first time in the country, c) introduction of homilies d) sourcing of funds for social service from the community rather than depending on any foreign donations, e) establishment of printing press, f) publication of books etc.

Looking at his personal life, one could see three pillars on which his spirituality was built. One was the 'continuous repentance'. Second was 'acceptance'. And the third was 'complete surrender'. He wrote: ‘God, you gave me a pure white dress of goodness. But I was foolish enough to make it dirty and became a sinner. You wanted me to be a role model for others and to become a light to others. But I don’t have the oil to light and there is no fire within me’. With continuous repentance, he entered the stage of acceptance of God’s will. He heard the inner voice: ‘As a priest, you are being called to holiness. You have forgone the world. Now, unless you get rid of even the smallest dust particle of the world from you, you would not find holiness.  That means, you need to exercise self-control in every step in your life: while you sit, walk, work, play …’ . With this realization, he reached the final stage of ‘complete surrender’ where there was no separate mind other than God’s will.

Fr Kuriakose Elias was a social reformer, educationist, professional manager and a prudent financial planner. No wonder, the congregation established by him in 1831, the ‘Carmelites of Mary Immaculate’ (CMI) has at present its activities in 25 countries with professionally managed educational institutions, health care centres, social service organizations, pastoral work mission stations and publishing houses. 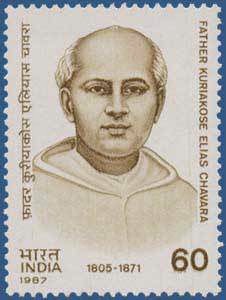 On April 3rd 2014, Pope Francis, the head of the Catholic Church signed a decree that would lead to canonization of Blessed Kuriakose Elias Chavara shortly. The Catholic Church canonizes those whose lives have been marked by the exercise of heroic virtue after it has been proved by common repute for sanctity and by conclusive arguments. The church does not make them God or Godly, but sees ‘saints as nothing more than friends and servants of God whose holy lives have made them worthy of His special love’ (Reference). For church, all saints are role models for people to lead a life valuable to society. Just like we fondly remember our loving fathers and relatives who have departed, the saints are universally recognized as models for people to get inspired to do good.

‘Sanctity is the vocation for everyone. Anyone who lives in profound communion with God can experience this’, said Pope Francis in his address on All Saints Day in 2013. He said: Saints are not supermen who are born perfect. They are ordinary people who followed God with all their heart. In the smallest and despised faces of people they saw God.

Though late, on this occasion it is necessary for the government, the academic institutions and the mainstream historians to initiate comprehensive research on the contributions made by Fr Kuriakose Elias Chavara to the Indian society. That will be a fitting honour and an appropriate tribute to the great social reformer of the 19th century Kerala.

Those who would like to have a quick reading about (Saint) Blessed Kuriakose Elias Chavara can read  ‘A Pearl: Truly Indian’, a brief biography written by Fr Thomas Panthaplackal CMI (2005). He  has very concisely showcased his life along with notes about him by very eminent people. You can access the e-book here.